'RISING STARS' SCORECARD: How did the first-time judges do? 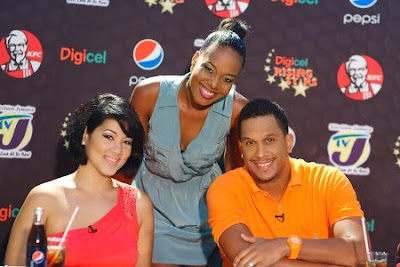 THE CREW: Tessanne, Terri and Bambino anchor the Rising Stars ship.
The new judges have finally entered the prime-time spotlight. Tessanne Cuffe and ZJ Bambino last night survived their first live appearance in the hot seats on Rising Stars, immersing themselves in the experience with shrewd advice and intermittent chuckles, as they conducted auditions in five locations islandwide. It was a surprisingly glitch-free outcome, seeing that though the two encountered standout hopefuls (several), including 16-year-old Dellando Colley, they were inflicted with the bad (numerous) and artistically challenged (countless).

In the end, I have high hopes for this new season of the widely watched talent show, not just for the reason that the worthy contestants will (as always) eventually rise to the top of the pile, but because Tessanne and Bambino seem to share a buoyant, delightful chemistry. Along with new host Terri-Karelle Reid (centre, in photo above), there’s little doubt that they will be effective throughout Season 8 in their new roles, which (based on the show’s new format) has bestowed them with the responsibility of selecting the top 12 for public voting. Tessanne: B+ Bambino: B