ROUND ‘4’: Queen B resumes her reign with moody, ballad-heavy latest

BEY & BEYOND: Get in the groove with Beyoncé.
It’s been a minute, but B season is upon us again. Beyoncé’s fourth album, aptly titled 4, may lack the scorching blitz of her past releases, especially 2009’s schizophrenic I Am…Sasha Fierce. But at 12 tracks (an additional three on the deluxe version), 4 still packs enough heat to last through winter’s chills.

The album, admittedly more ballad-heavy, feels less mainstream R&B and pop and more eclectic, with generous shades of funk and gritty soul characterizing the largely radio-ready midtempo cuts. For the loyal Beyoncé-heads, though, it doesn’t really matter as Beyoncé’s work consistently conveys reservoirs of emotion and power that never fail to resonate.

As it stands, 4 is a moody record with spurts of fiery energy that reaches a stunning crescendo on lead single “Run The World (Girls),” a ballsy salute to female empowerment. Other moments that lull the listener into a state of wistful tenderness include opening single “1+1,” an aching ballad about forging a real connection with that special somebody.

For me, perhaps the most stunning (refreshingly so) thing about the new album is that Beyoncé doesn’t seem as preoccupied with a man who done her wrong as she’s been on her previous records. Yes, she does deliver the biting missive “Best Thing I Never Had” but more than anything the singer is undeniably in a joyful place – and with 16 Grammys, multiplatinum sales, and one of the industry’s most powerful men on her arm, isn’t that happiness understandable? 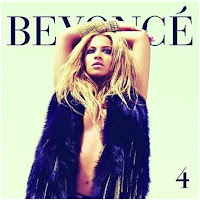 Ballads always get the A-grade treatment from Beyoncé, so it’s no surprise that ace songwriter Diane Warren’s singular contribution “I Was Here” boldly stands out in the disc’s second half as a soaring, anthemic meditation on legacy and respect, even in the face of its spare production. But if there’s another single that tops this one on the strength of sheer vocal dynamism and emotional heft, the unhinged, resilient track “I Care” attains that achievement. As for the CD’s deluxe version, the disco-flavoured, Prince-reminiscent “Schoolin’ Life” offers a proper lesson in how to make the old and new schools boogie together.

For a lesser artist, the pressure would be on to make every song count. Iit’s a less daunting challenge, met with flair and tremendous self-assurance, in the case of Beyoncé, effectively setting the reigning gold standard for female R&B-pop superstardom. Who run this motha? Tyrone’s Verdict: B+