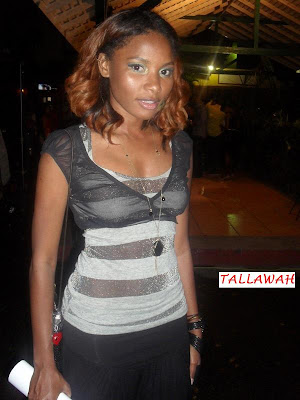 With icons Tyra Banks and Iman among her definitive inspirations, it was only a matter of time before Nicole ‘Sky’ Grey made the conscious decision to broaden the range of career options available to a striving fashion model like her. Last October, the fashionably thin ingénue made a warmly-received acting debut as a gangster’s love interest in the Jamaican film Better Mus’ Come, before going on to land a follow-up role in the Sundance hit Restless City. “The energy is really good,” says Grey about tackling the big screen. “I love that I get an experience that’s different from fashion, but it’s much harder than fashion.”

And it would appear that she’s left a lingering impression on filmmakers with not only her sense of resolve and rustic beauty but her on-screen accessibility, as the movie offers seem to be rolling in. “In a week from now I am going to New York to read another movie script that they think might be good for me. I’m very excited.”

But Grey, who declines to reveal her age except to say that she is in her 20s, has another passion that she is just itching to explore. “Music is my first love,” she says. “Modelling came along and took up much of my time, but I think I've reached a level in my career where I can take a break and give music some attention.”

To this end, Nicole Grey the singer has to date recorded a handful of sexy dancehall-pop tracks that sound promising (visit her YouTube channel), and makes a point of dropping names like Lady Gaga and Tanya Stephens as the entertainers whose music she is ever drawn to. “I see myself premiering some videos real soon and shooting more movies. It’s been an amazing experience that I want to keep enjoying.”

Posted by TALLAWAH Magazine (tallawahmagazine@gmail.com) at 1:17 am