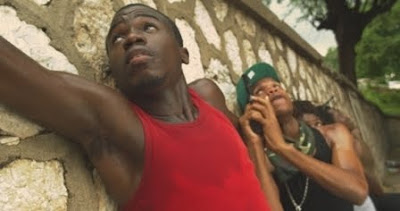 IN THE TRENCHES: Burton (forefront) makes his big-screen debut.

If the producers behind the soon-to-be-released Jamaican film Ghett’a Life have their way, this summer will be all about box-office domination with a Caribbean twist. Down to the film’s cast is optimistic about the film’s chances and its potential to connect with mass audiences on the merit of the power and authenticity with which the story is told.

With its fiercely committed all-Jamaican cast and crew, including producer Natalie Thompson, and an impressive batch of actors led by Carl Davis (Dancehall Queen), Teddy Price (Glory to Gloriana), Winston ‘Bello’ Bell (Third World Cop), Karen Robinson (Soul Food) and Chris McFarlane (Better Mus’ Come), who portrays the ruthless Don Sin, there is no limit to the ambition driving this film into local and foreign multiplexes.

McFarlane, for one, believes the movie has substance going for it and offers the actors a chance to showcase what they’re truly made of. “This is an opportunity for people to take me a lot more seriously when it comes on to character building,” he says, before adding that he is hopeful that people will see Ghett'a Life as a story of triumph and achievement than just another “gun movie.”

Davis takes it one step further. “I think the movie is opportune for the time,” he says. “It’s perfect for the time we’re in when many people considering politicians and how they contribute to the destruction of values and attitudes in the country.”

Ghett’a Life introduces, also, Kevoy Burton, a student at Ardenne High, who tackles the lead role of Derek. Admittedly honoured to work with such an experienced cast and crew, Burton reveals that he was able to tap into his own experiences in playing the role. “I realized that the character was somebody I could relate to because I grew up in a politically divided community,” he said, noting that though his own family was not as intense on the issue, he understood the issues Derek faces.

Ghett’a Life is written, directed and produced by Chris Browne, the director of Jamaica’s highest grossing film to date Third World Cop. Set against the tumultuous backdrop of Kingston’s inner-city, the movies explores one boy’s (Derek) attempt to achieve boxing glory, despite the political divide that threatens to tear his community and country apart. His journey takes him on a path that will force him to defy his family and his community – and the result will either destroy him or unite his community.

Browne, whose previous credits include the award-winning short films Entry Denied and Crossfire, explains that the idea for the film was sparked when he visited Sandy Park several years ago and took in a boxing match. Amazed by the gritty, underground nature of the scene, he became inspired to explore things further, ultimately deciding to set it against the political tribalism rampant across the island.

“We don’t kill one another about God, like people do in some parts of the world,” says Browne. “But what we do kill one another over is politics.” In 2006, Browne’s vision was recognized with Hartley-Merrill International Scriptwriting Prize. But, five years later, who knows, a solid run at the box-office could be the ultimate prize.

Posted by TALLAWAH Magazine (tallawahmagazine@gmail.com) at 11:15 am