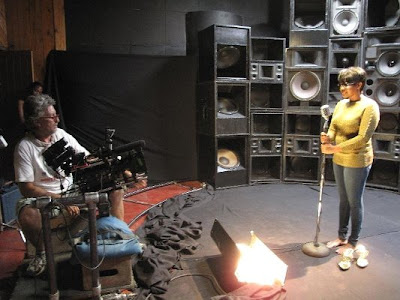 ON SET: Stephens and Browne working on the song's accompanying vid.
"I wanted to make it so that it was not too synonymous with the movie, yet reflect the themes of the movie," says Tanya Stephens about penning a track for the upcoming Jamaican film Ghett'a Life. "This is the first time the name of a movie has appeared so many times in a track I've done, so I had to make extra effort with this one."

An accompanying video to the track was shot in Kingston last week, directed by the film's award-winning director Chris Browne. "Once we had a rough cut of the film in November last year Tanya came and saw it and wrote "Get A Life" specifically for the film," said Browne, adding that the song's power goes well with the feel of the movie. "The song is powerful; the lyrics and message became an anthem for the film, so it was important to us to do a video with Tanya which showcases not only her talent but also the entire concept of the film."