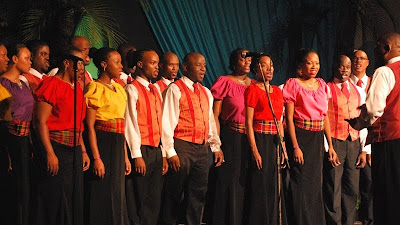 ALL TOGETHER SING: University Singers deliver on foreign soil.
The University Singers, on their first-ever trip to the Central American countries of Mexico and Belize, have been captivating audiences with the lush harmonies for which the acclaimed group has earned reknown. Performing to full houses in the Mexican cities of Cancun and Chetumal, and with one performance thus far in Belize City, the singers are thrilling audiences on their 2011 summer tour, dubbed “ From Mozart to Marley.”

According to a release from the Singers, the tour was conceptualised by the Governor General of Belize, His Excellency Sir Colvile Young, himself a founding member and former director of the Singers. The concept was put into action by the UWI Open Campus, lead by its head, Mrs. Jane Bennett, and benefitted from the cooperation of the State Government of Quintanaroo.

On Thursday, July 7, in Cancun, the performance was held at the Casa de la Cultura, while on Friday, in Chetumal, the performance was at the Teatro Constituyentes Del ’74. In both locations the performances were attended by members of the state government, including the mayors of both cities. At the end of the recital in Chetumal it was announced that the Singers were being invited to return to participate in an international music festival to be held across the state of Quintanaroo.

Saturday, on arrival in Belize, the Singers were met by His Excellency Sir Colville Young and Her Worship Zenaida Moya, the mayor of Belize City. In a brief ceremony, the mayor presented the choir with the key to Belize City, expressing the hope that this will not be the last time we visit, while encouraging more persons to travel from Jamaica to Belize. Moya noted that she travels to Jamaica quite frequently and hopes that this trip by the University Singers will stimulate more travel between both countries.

The University Singers' summer tour runs from July 7 to 17 and continues with performances in Belmopan and Belize City before continuing on July 13 in Florida, where the choir will give three performances.