NICKI MINAJ’s ART: Did the hip-hop star 'cross it' or cross the line at Reggae Sumfest? 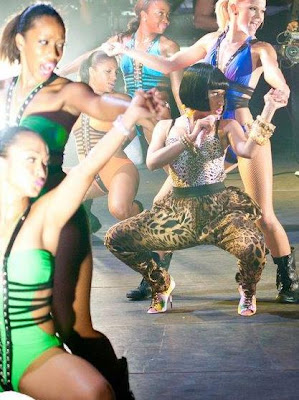 DIP IT LOW: Minaj (centre) and her dancers put in work at Sumfest.

One of the prickliest subjects in the world of entertainment has always been the use of expletives by performers during their live shows. The issue really grinds some people’s gears. Especially Jamaicans. Our dancehall artistes are regularly hounded by cops over it, some even picking up court dates and jail time. Visitors to our shores, too, have felt the weight of our intolerance for the mixing of music with cuss-words. When hip hop star Drake performed here some months ago he got into hot water with police over his use of one of the island’s most notorious bad words (it starts with a ‘b’).

Fast-forward and we are at Reggae Sumfest at Catherine Hall this past weekend. Saturday night’s main headliner, the Trini-born hip-hop sensation Nicki Minaj, is on stage, rocking a cat-print ensemble and a sexy black bob like only she can. (Did you also see her pink microphone? I know, right…). Any follower of today’s youthful hip-hop landscape knows that several of Miss Minaj’s popular songs are peppered with expletives and phrases more colourful and whimsical than her outfits. Here in Jamaica, it is customary for acts to be briefed before they grace the stage that their performance should be expletive-free (or perhaps the closest thing to that ideal).

So, naturally, many in the Sumfest audience were shocked that Minaj’s set contained some really crystal-clear expletives (such as…). Personally, I heard them (most notably during her rap on “Monster”), but I was so caught up in the electricity of her performance that they went through one ear and out the other. (Minaj is captivating and expressively thorough on stage. You can’t take your eyes off her.)

And then it was over. And people started talking – in the crowd, in the press room and on Twitter, where reactions were swift (though more about if Minaj was lip-syncing). Here’s Dr. Marcia Forbes’ take (via Twitter) on the whole thing:

Unimpressed with Nicki Minaj & her badword cussing performance. Could Lady Saw, Tanya Stephens, Ce'Cile etc. do that & get away with it?

Beef with double standard. Media & Police would be all over local artistes re expletives. Nicki was warned but went ahead cussin anyway.

Allow me a little rant time plz. No Jamaican could go T&T and carry on w cussing. Yes, Sumfest crowd enjoyed Nicki but that's our weakness!!

Even on the ride back to Kingston the next morning, the conversation veered mainly from Minaj’s genetic ass-ets to her energy to the expletives. “Ah pure badwud mi hear har cuss,” one man gave out.

On the stage, at one point during the second half of her act, Minaj admitted that she was instructed not to use any curse-words. So should her actions be deemed blatant disrespect for the organisers and her audience? Honestly, I wouldn’t go as far as to describe it as such. The way I see it: like so many others the world over, what Minaj is principally guilty of is being too caught up in the thrill of the electrifying moment to reign herself in a bit. It can happen. No one is faultless.

Still, some people are very sensitive about these unfortunate situations. However, it would be grossly unfair to try and diminish Minaj’s otherwise top-notch showing by harping on the irregular inclusion of the expletives. In all fairness – and judging by how she made time during the performance to reach out and connect with the young fans with conversation and even tee-shirts – in my mind it took nothing away from the performance. I had a good time. And, for the record, she was not lip-syncing. 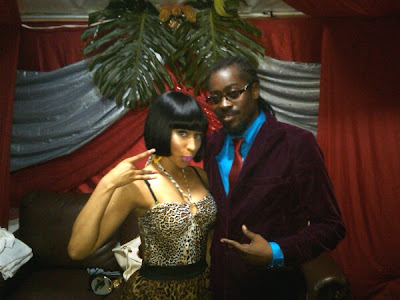 Posted by TALLAWAH Magazine (tallawahmagazine@gmail.com) at 2:56 am

Email ThisBlogThis!Share to TwitterShare to FacebookShare to Pinterest
Labels: Commentary, Do I Smell a Controversy?, Reggae Sumfest 2011, Seriously?