REGGAE SUMFEST Preview: 5 Top Acts to Watch out for This Weekend 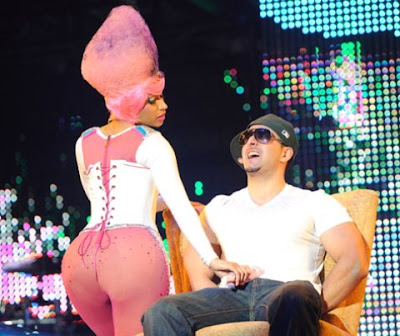 CATER 2 U: Miss Minaj is world-famous for her lap-dances. Will Sumfest be so lucky?
Catherine Hall, MoBay is the must-do destination of the week, for a slew of performances that will be the talk of the entertainment and social circuits long after the curtains come down on the 19th renewal of Reggae Sumfest on Saturday. Of the dozens of acts set to grace that coveted stage, these are the five we are keenly looking out for:

Vybz Kartel: It’s not been an easy year – again – for the self-proclaimed Gaza Emperor. But while the thisclose scrutiny and constant controversy could overwhelm entertainers of inferior stamina, expect Kartel to attack that stage, lyrical guns blazing, without an ounce of care in the world.

Cherine Anderson: Ring the alarm! Miss Anderson has been the subject of a shocking, if unexpected, evolution of late, and it goes without saying that much of that red-hot passion and jaw-dropping style will characterize her showing on International Night II.

Konshens: One of the brainiest acts now working in dancehall, Konshens continues to surprise and challenge with his piercing lyrics and no-nonsense approach to the biz. His performance will very likely reflect that brilliance.

Nicki Minaj: With her Caribbean roots and global reputation for putting on a vibrantly eccentric show, Jamaican fans of hip hop's reigning queenpin should be in for a real treat. Added bonus: a possible lap-dance or two for super-lucky concertgoers on Saturday night.

Mya: The petite songbird, who has a longstanding relationship with reggae-dancehall, is set to make two cameo appearances this weekend, teaming up with Spice on Dancehall Night before joining Wayne Wonder for a performance of their hip new collabo the next day. Back story: Who can forget her sultry, kitten-like guest spot on Beenie Man’s “Sim Simma"?