RISHILLE BELLAMY: Why she is theatre’s best-kept secret 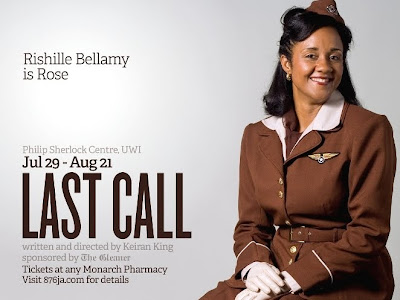 Some actors display utter commitment, others disappear into roles. But there are those still who defy expectations, transcending lofty heights to fashion an authentic portrayal. Those who caught Rishille Bellamy’s show-stealing performance as an aging office worker and mother in 2010’s acclaimed revival of Barbara Gloudon’s Appropriate Behaviour by the University Players can attest to the fact that she merits a place in that third category, usually reserved for the most outstanding. Although it was her first major notice as an actress, the performance remains one of the most impressive in recent memory.

Since that memorable turn, for which she earned Thespy and Actor Boy nominations, Bellamy has won critical raves in two other works -- Amba Chevannes’ droll Ms. Burton Gets A Promotion and the relationship dramedy A State of Affairs from Basil Dawkins, in which she played an imperfect marriage counsellor. In all her roles, she has maintained that fresh-faced decency with a touch of wit (and the tiniest hint of unforced glamour) that makes her instantly likable.

This month, Bellamy is charged to offer even more in Keiran King’s period musical Last Call, playing Rose, a fancy airline stewardess with a huge appetite for intimacy. Bellamy describes Rose as “a romantic-at-heart” blessed with beauty and good breeding. But if there’s one major flaw that stands out, she suggests, it’s her gullibility. Describing the ongoing process of transforming into the character, Bellamy notes, “It’s been interesting and challenging at the same time. I’ve had to do some searching to find that naiveté, what it is that makes her human.”

That quest for authenticity, one comes to understand, extends to the rest of the play itself, which takes place in pre-Independent Jamaica. “It’s coming together nicely, and we have researched the period, but part of the difficulty for us was in accessing the history of Jamaica at that time,” says Bellamy. “A lot of what is available about Jamaica around that time is from America and Britain, so getting good historical information has been challenging.”

As Bellamy’s stage career goes, Last Call represents a reunion with pal Maurice Bryan, who played her flamboyant son in Behaviour. “It’s been great. We’re having a ball. We’ve had a great time. I’ve learned a lot from him. He’s quite a gracious person, and I enjoy working with people that I like,” explains Bellamy, who, like so many others, got her artistic “grounding” years ago as a member of Little People, Ashe and the Jamaica Musical Theatrical Company (JMTC), before moving on to drama school at the Edna Manley College.

These days, as her artistic life enters a promisingly fruitful phase, the theatre has a powerful rival for her complete attention. “Family is my first love, and it takes up a lot of my time so I don’t have much time for hobbies,” says the happily married actress, who is passionate about the kitchen and is a trained makeup artist. “But I have a husband and daughter who understand that I love theatre, and they are okay with me doing what I love.”

More on Rishille: Her faves
Film: The Sound of Music. “I’ve watched it like 500 times, and I could watch it another 500.”
Inspiration: “I’m an Oprah fan. I like that kind of honesty and openness. I’m into character and heart.”
Book: “Certainly the Bible. It’s my manuscript for life. The more I read it, the more my life improves and my perspective grows.”