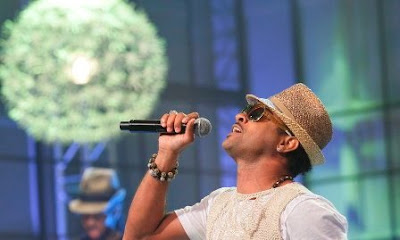 By all appearances, dancehall superstar Shaggy is not one to pass up an opportunity to display some national pride when in the midst of an international audience. While performing his feel-good new jam "Sugarcane" Friday night on NBC's The Tonight Show with Jay Leno, the black, green and gold of the Jamaican flag held equal prominence onstage with the boombastic performer, who was a familiar spectacle in show (all charisma and high energy) as he promoted the lead single off Summer in Kingston, his latest release. Shaggy makes his next late-night appearance on July 26 on Lopez Tonight on TBS.

"Sugarcane," a bouncy, fun-in-the-sun single, perfect for the season, currently occupies the top spot on the Canadian Reggae Songs Chart and sits at number 5 on the US Reggae Songs Chart. Meanwhile, Summer in Kingston, comprised of eight new tracks, got an officially launch at a massive free concert in New Kingston on Saturday, but the album will not be officially released until July 19, via iTunes and other digital venues for a "recession price" of $2.99.