SINGING SENSATION: A return to her musical roots is a “breath of fresh air” for Sakina 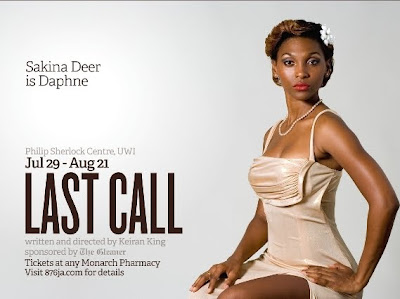 ALL GROWN UP: "I will always be open to new opportunities and challenges," says Deer.

On the eve of her latest production, the stage musical Last Call, which opens this Friday at the Philip Sherlock Centre, UWI Mona, versatile actress Sakina Deer speaks about getting to sing live again, her expanding body of work and what she’s looking forward to the most career-wise.

TALLAWAH: National audiences have come to associate you with plays by Basil Dawkins, as we rarely see you performing outside the Little Little Theatre. How do you feel about the change of scenery with this new musical?
Deer: It’s great because my roots are in musical theatre; I started out with Father HoLung & Friends. So to be able to return to that kind of production after a break is a breath of fresh air, and I am really looking forward to the opening [this Friday].

TALLAWAH: Your last performance in a musical was in 2007’s Disco Inferno. Were you at all worried about being able, after four years, to meet the usual challenges associated with song-and-dance shows?
Deer: Well, initially I was because I hadn’t done much singing since then, except for the occasional weddings and funerals. But Karen Armstrong, who is the show’s musical director, took her time with me. For me, it’s like riding a bicycle, so everything you had learned comes back in no time (Laughs).

TALLAWAH: Do you think you will ever live down Precious from Uptown Bangarang?
Deer: I don’t think so (Laughs). I think every set of people love to associate me with a different character I’ve played over the years – whether it’s Cher from Diana, Precious or Monica from Which Way Is Out? Everybody has a favourite that they love to see me as.

TALLAWAH: If you had to choose a favourite…
Deer: I would probably go with Cher because playing her I had to learn so many things. She has stayed with me so much. For the first time I got to play someone who was impaired, and there was a lot that I had to do with the role. It demanded a lot.

TALLAWAH: Tell me about the character you tackle in Last Call.
Deer: In Last Call, I play Daphne, who is one of the four friends who meet up after 10 years. She has gone through many changes since school, and she has had a tough life. She is envious of her friends, as she has not been able to achieve many of her dreams. She has a lot of bitterness and regret, and she is not so joyous to be reuniting with the others. I like playing her because her whole movement is different. It’s a fantastic role. And she is a lounge singer, so it’s like a performer playing a performer. And she is a little sassier than Sakina, so I enjoy getting hot and sexy to play her. (Laughs).

TALLAWAH: What are you looking forward to the most in the next phase of your life?
Deer: My biggest dream so far is to do Broadway. Right now, I have a home with Basil Dawkins, but I will always be open to new opportunities and challenges. I am also open to doing some work in film and maybe television sitcoms, but Broadway will always be my ultimate goal.