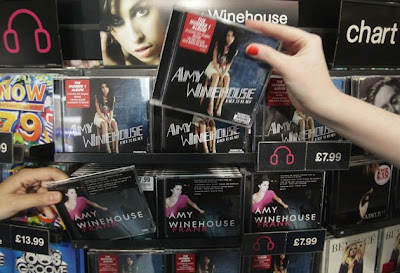 ON THE RECORD: Sales of Winehouse's albums have sky-rocketed since her passing.

Amidst all the talk about the small but rich musical legacy Amy Winehouse has left behind in the wake of her recent death, there is recurring mention of the unreleased material the singer recorded, which some insiders are hoping will form the content of a posthumous third album. Winehouse’s first two albums: her 2003 debut Frank and 2006’s Back to Black, which picked up five Grammys have re-entered the music charts, pushing sales to inspirational figures.

Her record company, meanwhile, remains tight-lipped over the album's contents but, according to her biographer, many of the new songs have a reggae feel, inspired by the time she spent last year in St. Lucia. “In what we can tell from the third album, I think she had been quite influenced by reggae," said Chas Newkey-Burden, who wrote 2009’s Amy Winehouse: The Biography. Speaking to the UK’s Independent newspaper from his home near Windsor, Newkey-Burden added: “I think Amy would have been quite keen for a slightly indulgent third album. It might have been her way of showing the world what she was really like.”

Chris Goodman, Winehouse's publicist, also confirms there is a lot of material available, but he couldn’t say when it would be released. “She wrote all the time," he said. "If it's for a new album, it's difficult to say.”

For me, the release of a posthumous Winehouse album wouldn’t so much as muddle her legacy than offer a refreshing capper to the years of Winehouse-mania. And laden with some feel-good reggae grooves at that? I say bring it on.

Posted by TALLAWAH Magazine (tallawahmagazine@gmail.com) at 12:36 am