BEST OF THE BEST: Usain Bolt shares his secret formula for staying on top 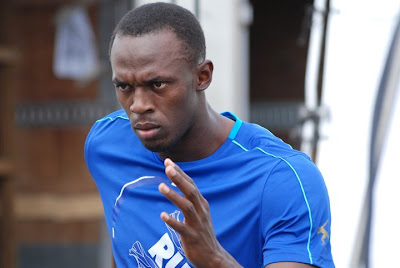 GAME FACE: Bolt is the picture of concentration.
It's perfectly normal to be curious as to how the world's most elite athletes stay in A-class shape and ahead of the pack. For the World's Fastest Man (WFM), it's simple: competition drives him to stay winning. "I love competition...I'm very competitive; I get that from my dad," he explains, laughing, in a recently premiered "Inside The Edge" video presentation prepared by sponsors, Gatorade.

But Bolt's surefire formula for defending his pair of world records and his coveted crown as the fastest man on Earth does take on physical requirements, too, of course. "I fuel myself before, during and after to get the best out of my workouts," explains the superstar athlete, who turns 25 later this month.

In the two-minute video, which features several Jamaicans sharing their views on the athlete's "lightning" speed on the track, Bolt also talks about getting himself focussed to execute his races and how it felt to break the 100M world record for the first time. "It's a moment you'll never forget," he says. "The loud noises, the cheers. I get chills just talking about it."

Watch Bolt discuss his "edge" in the clip below: