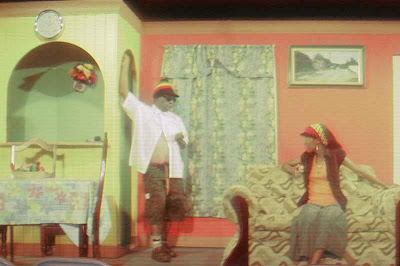 SCENE STEALERS: Beale and Bell are impressive in Adopted Child.

It’s certainly been a year for fresh and emerging talent. On-the-rise actress Trudy Bell is so utterly believable in the title role of the new comedy-drama Adopted Child that it’s hard to imagine or even predict where she’ll end up next. Pulling on youthful angst, incredible wisdom and a hard-to-dismiss masculine streak, Bell gives a stadium-bright and riveting performance as Stellarita, a Rastafarian teenager taken from a state-run place of safety to share a home with the warm-spirited Agnes Gungo (Belinda Reid) and her businessman husband, James (Michael Nicholson).

Mature way beyond her teenage years, Stellarita has music in her veins and a penchant for high-brow dismissal of the inferiors who cross her. Her no-nonsense, sometimes abrasive personality soon collides with the man of the house, who waned to adopt a boy. But it’s all part of writer-director Paul Beale’s strategy to conjure a psychologically taxing environment that puts his young female protagonist to the test, coupled with her fruitless ongoing quest to uncover her past, which has been mired in nothing but secrets and unsatisfying scraps of information.

The play, full of frequently hilarious scenarios, is essentially an examination of adoption, identity, expectations and ambition. Though the production lacks the requisite power to break any new ground, it is praiseworthy for its frank and entertaining look at a societal issue rarely featured in the artistic realm.

Bell aside, the rest of the seven-member ensemble give strong accounts of their ability as actors. Beale, in particular, has some scene-stealing moments as the fiery and self-assured Ras Muckery, a shady musical groomer from Stellarita’s past. Nicholson and Reid are also appealing, along with Donald Thompson and Stede Flash (as a father-son technician duo) and Patrick Smith, who appears in a few scenes as a family colleague and certified busybody.

But, in the end, it is the young Miss Bell, last seen as Melcita (opposite Andrea Wright’s Delcita) in Over Mi Dead Body, who leaves the most memorable impression. A gem of a discovery for Stages Productions, she is simply sensational. Stellarita is no innocent, but in Bell’s portrayal there’s a vulnerability beneath that veneer of toughness, a fragility that manifests itself in her search for her identity, which gives the character an unassuming quality of sorts. It’s testament to Bell’s astonishing talent.
Tyrone’s Verdict: B+

Posted by TALLAWAH Magazine (tallawahmagazine@gmail.com) at 12:48 am