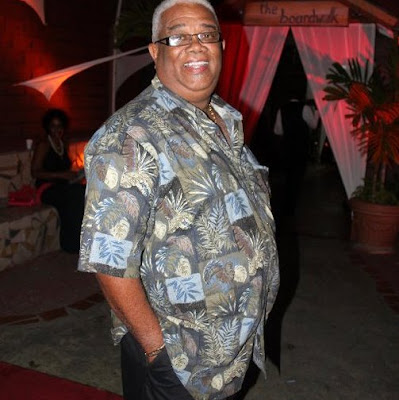 TRUE ORIGINAL: "Acting is something you have to be committed to," observes Johnson.

More than four decades in the same biz is enough to make anyone feel exhausted. For theatre legend Volier Johnson, the temptation to call it quits any day now is never far from his mind, but when it comes to natural talent and stagecraft you’d be hard-pressed to find a more mature actor expertly side-stepping artistic decline. Celebrating his 60th birthday this year, Johnson is back on stage playing an adulterous husband in the comedic potboiler Relatively Speaking. He speaks with TALLAWAH:

TALLAWAH: Tell me about the character you portray in Relatively Speaking?
Johnson: He’s a well-off man in his late 50’s, who’s been married for some 30-odd years to a nice church-going wife. But he and the wife are more like brother and sister than husband and wife. So he develops an affair with this girl from Kingston, but the girl wants to break off the relationship because she has a younger boyfriend, who is played by Chris Daley. And that’s when the problems start.

TALLAWAH: This role shouldn’t be too much of a stretch for you.
Johnson: It’s a good role. I like the character; I feel good about it. This is a man who, despite everything, is not going to leave his wife for anything. The girl he has on the side is just for excitement (Laughs).

TALLAWAH: For someone who’s spent decades inhabiting characters, what are your thoughts on this phase of your career?
Johnson: I’m kinda getting tired now. I feel that it might be time to throw in the towel. I thought theatre would have become more exciting, but now it’s more about making money. I used to have way more fun back in the day.

TALLAWAH: As for the new generation of actors, are you optimistic about theatre’s future?
Johnson: There are some good actors who are coming up in the industry. Youngsters like Everaldo Creary of NoMaddz, who is a very good actor and [Sheldon] Shepherd, who is also talented. They have dedication, and I think they will go far. Acting is something you have to be committed to, and you have to fulfil that commitment.

TALLAWAH: Is there anything left for you to accomplish?
Johnson: Not really, because one of the things I wanted to do as an actor was [to appear] in a two-man show, and I did that with Toy Boy. Over the years, I’ve done drama, comedy, musical and basically everything else. I’ve done it all. But before I finally retire I would love to do a tour with Oliver [Samuels]. Get a good script and tour the island and overseas.

TALLAWAH: Do you get stage fright at your age?
Johnson: Tell you something, I thought I’d extremely nervous doing this show, but not all. Not even butterflies in my stomach. That’s why I’m thinking that maybe it’s time for me to throw in the towel. (Laughs). For opening night there was the little anxiety because you are wondering how the audience will react to the story. But I find that people are glued to the show, each scene, because they really want to know what’s going to happen next.

Posted by TALLAWAH Magazine (tallawahmagazine@gmail.com) at 2:44 am