CRAZY FOR YOU: Like good wine, Last Call seduces and satisfies 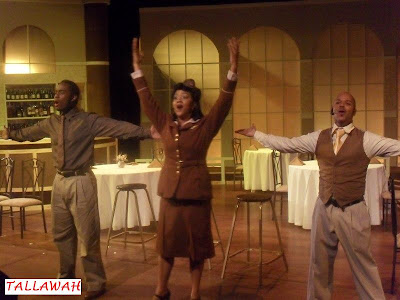 THESE ARE THE DAYS: Powell, Bellamy and Bryan sing it out.
Although “love is not my thing,” is the constant refrain of one of the main characters in Last Call, there’s hardly a more rigorously explored concept in the new musical than the healing power of love. Love, lost and found would be an apt subtitle for the production, which opened at the Philip Sherlock Centre last week. The professional debut offering of writer-codirector Keiran King, it’s a nostalgic and frequently sublime piece of work steeped in vintage storytelling, yearning, heartache and serendipity. And while a strain of melancholy hovers over the dimly lit stage, the evocative music (supplied by a live band) and the solid performances restore and sustain much of the joy to be had.

It’s pre-Independent Jamaica (the 50s are approaching) and remnants of colonization are still palpable. The very happening Myrtle Bank Hotel provides a tony setting, where four friends, hailing from eclectic backgrounds, are set to reunite a decade since they last saw each other face to face. Cecil (Maurice Bryan), the sharply dressed Duke Street banker, and Rose (Rishille Bellamy), the sweet air stewardess, are the first to arrive, keeping company in the hotel’s bar and dining lounge with Clarence (Andrew Lawrence), their server.

We then meet telephone man Joseph (Shayne Powell), best described as a lovesick pup nursing an abiding devotion for Daphne (Sakina Deer), the brash and world-weary diva/lounge singer, who is the last to arrive, naturally. It wouldn’t be a stretch to say that the circumstances of the group’s reunion are rather unforeseen, especially for the eternally idealistic Rose and Cecil.

With its moody art-house ambience, hints of romance and drama, and retrospective salute to the heyday of original class and glamour, Last Call is essentially a play of shattered dreams and thwarted hopes, but an irrepressible spirit of optimism courses throughout. Taking his cues from the old masters, King goes after refined sophistication with his script. And while the dialogue isn’t always enlightening, the writer’s eye for human fallibility and obvious passion for the period consistently shine through. As directors, King and Michael Daley guide the proceedings with deftness.

Members of the cast have never been better. Bellamy is delightful, playing Rose with warmth and a luminous gaze. Bryan’s acting and singing are impressive, particularly on the solo number “Not for Me”. Lawrence draws on his trademark booming baritone and convinces as Clarence. As for Powell, he cements his star-on-the-rise reputation with a terrific portrayal and shares a buoyant chemistry with Deer, who gives her finest performance.

While the show is not entirely without fault, the painstaking attention to detail that clearly went into the production largely reaps rich dividends, as the major elements – lighting, wardrobe, set design, movement and the musical score – make sterling contributions. Musically, the numbers “Life is more than Romance” and the title track are memorable.

Beautifully told and well performed (the singing voices are on point), Last Call rightfully earns praise and deserves attention. Audiences will fall for the authentic feel and wildly vintage appeal. Tyrone’s Verdict: A-