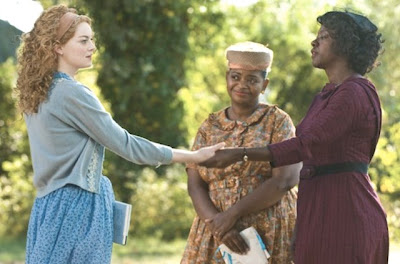 IN LIVING COLOUR: Stone, Spencer and Davis star in The Help.

If nothing else, The Help conveys a compelling sense of what it means to be fated by the colour of one’s skin. At its core the comedy-drama is a piercing and haunting look at race, class and social injustice in Civil Rights-era America. And although it captures such a severely painful period of Black history, the story is spun with generous doses of humour and heart. In the end, it’s nothing less than touching and quietly triumphant.

Based on Kathryn Stockett’s 2009 international bestseller about black maids stirring up drama in ’60s Jackson, Mississippi and adapted for the screen by first-time helmer Tate Taylor, the film boasts top-notch performances from the pair of Viola Davis (heartbreaking and Oscar-worthy) and Octavia Spencer (deliciously wily) and the rest of the predominantly female ensemble that includes Emma Stone, Bryce Dallas Howard, Allison Janney, Jessica Chastain, Sissy Spacek and Cicely Tyson.

Stone has never been better, convincingly portraying Eugenia ‘Skeeter’ Phelan, a young and headstrong aspiring writer who solicits the help of the oppressed black maids in Jackson to share stories of their experiences as domestic servants for a book she’s writing. Though initially reluctant out of fear of losing their jobs – and their lives – the women (led by Davis' Aibileen and Spencer's Minny) eventually agree to participate, and upon release, the juicy tome and its mammoth impact change lives forever. Stone draws on her warm spirit and fearless resolve to give Skeeter the charm and appeal that not only impresses these down-trodden women but deeply resonates with viewers.

Speaking of connection, while offering unforgettable insight into the dire experiences of maids in that racially charged era, the film reels us in on the back of its fearless examination of its difficult subject matter coupled with an emphasis on the resilience of the human spirit.

It’s hardly surprising that, since its release, The Help has courted controversy surrounding the nature of some of the events depicted. Race relations, after all, remain among the world’s prickliest issues, whether presented in a format that’s fictional or otherwise. Pain and searing rage associated with that period of our history are still very much alive – and, it seems likely to conclude, will remain so.

Still, for all the dissenting talk, I found Taylor’s deftly directed and strongly acted film immensely heartwarming and entertaining. I was deeply moved. Tyrone’s Verdict: A

Email ThisBlogThis!Share to TwitterShare to FacebookShare to Pinterest
Labels: Commentary, Do I Smell a Controversy?, Film Review