I AM NOT MY HAIR: Stellar cast assembled for local revival of Hairpeace 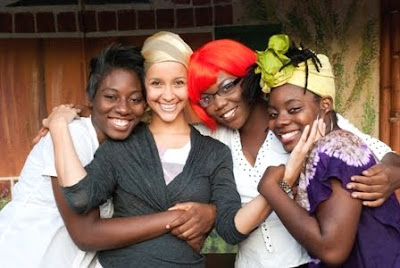 SISTER CIRCLE: The ladies of Hairpeace.

"[It's] simple, yet powerful truth, humour and heart,” offers director fabian thomas in explaining why he opted to revive Janice Liddell's Hairpeace, one of the new works closing out theatre's summer season. thomas, who is helming a production of the play for the second time in his career (under the Sankofa Arts Facilitation banner), points out that he was also influenced by the play's topical subject matters, which provide a unique opportunity to twin efforts of promoting an entertaining production and raising awareness about cancer and substance abuse.

Hairpeace, written by Liddell, who also penned the acclaimed Who Will Sing for Lena?, depicts the lasting bond of friendship between four women with different hair 'expressions' who gather for the 40th birthday party of Carmen, a cancer survivor. With a well-crafted mix of comedy and drama, the play also delves into the relationship between three of the women and their mothers, as well as the issue of alcoholism.

According to the director, the Jamaica Cancer Society and Woman Inc. have already taken benefit fundraising nights of the show, and he hopes these and other organizations, NGOs, and groups that focus on the health and well-being of women will follow suit.

Hairpeace opens at the Pantry Playhouse on August 19 and runs through September 18. Showdays and time: Fridays and Saturdays at 8:00 p.m. and Sundays at 6:30 p.m.