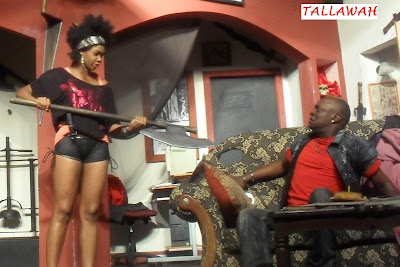 FATAL ATTRACTION: Davis has a score to settle with Campbell.

If hell hath no fury like a woman scorned, then pity the man who encounters three such women – all at once. Such is the fate of the titular character in the extravagantly hilarious play Charlie’s Angels, the latest from Patrick Brown and the Jambiz gang, which is an explosive and revealing meditation on karma, sex, deception and misplaced priorities.

Veering between electrifying drama and side-splitting black comedy, the play follows Charlie Woods (Glen Campbell), a sweet-talking playboy/womanizer who finally meets his match and gets the surprise of a lifetime when he wakes up chained to a piece of furniture in a mysterious apartment owned by Shanicka (Camille Davis), a seriously disturbed young woman who has done up the place with an assortment of “medieval torture equipment.”

At the outset, Charlie fails to realize that Shanicka is actually a one-night stand from his past whom, we come to understand, he used and then discarded like an old rag. But Shanicka will not be ignored and has masterminded a plan to teach him a permanent lesson steeped in retribution over his callous treatment of her affections. And of so many others, because, as it turns out, Charlie has kept a diary documenting his hundreds of conquests (aka ‘kills’), even taking the time to meticulously detail and grade each encounter. Behold a man fiercely committed to his work.

More revelations emerge like a deluge with the arrival of two other aggrieved women eager to participate in the revenge scheme: the grammatically challenged and high-wired “erratic” dancer Bubbles (Teisha Duncan) and Keisha (Sharee McDonald-Russell), a timid nurse with a quiet condescending streak.

Taking turns, the women launch an all-out verbal (and occasionally physical) assault against Charlie, with Bubbles at one point describing him as “a special breed of human dog.” (If you ask me, Charlie Woods’ name should have been a warning to these women.) But as far as the plot goes, a singular question hovers above the action: Can the women stick to the plan and exact their special brand of vigilante justice or will their catty female instincts drive them to devour each other instead?

Brimming with delicious surprises and clever and funny details, the play is a well-wrought piece of work that indisputably finds Brown raising the bar for local comedy writers – and you expect nothing less from the reputedly prolific playwright. Under his sure-footed direction (jointly with Trevor Nairne), the actors are in fine form.

With a mix of manly egotism and vulnerability under pressure, Campbell gives a solid performance as Charlie. Davis, getting to the heart of the character, brings power and terrific conviction to the troubled Shanicka, while McDonald-Russell eventually brings out Keisha’s coyness and superiority complex. As for Duncan, a wonderful addition to the Jambiz crew, she is nothing short of a fire-cracker, perfectly conveying Bubbles’ spark and vivacity.

As it happens, Charlie’s Angels has next to nothing to complain about. The show, boasting a terrifically designed set, works amazingly well, chiefly on account of its mature balance of high-octane comedic content against a compelling exploration of serious relationship matters (including but not limited to the mind games people play), while raising a spirited debate about human instinct versus behaviour versus choice.

Revealing and certainly ‘unforgettable,’ Charlie’s Angels is one of the year’s major triumphs. Several days after exiting the theatre, I’m still laughing. Tyrone’s Verdict: A 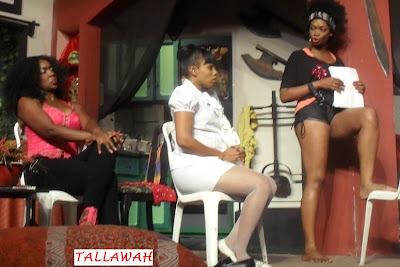 CALLED TO ORDER: Duncan, McDonald-Russell and Davis outline the plan of attack.

MORE:
>> Girl, Interrupted: Camille Davis takes on her most provocative role yet