I’M WITH THE BAND: Karen Armstrong and Alpha Boys give Last Call its musical punch 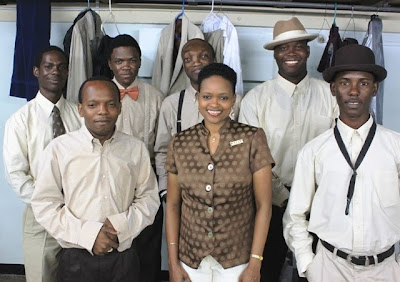 ONE OF THE 'BOYS': Armstrong (centre) with members of the Alpha Band.

Keiran King’s romantic musical Last Call, which just enjoyed in its final weekend at UWI Mona’s Phillip Sherlock Theatre, has been on a critically acclaimed run over the last three weeks with patrons flocking to experience the magic of the legendary Myrtle Bank hotel in Jamaica, circa 1949. A big part of the production’s magic is the seven-piece orchestra led by music director and vocal and orchestral arranger Karen Armstrong.

Armstrong, a classically trained musician and music teacher (piano and violin), has been playing, composing and arranging music most of her life. Last Call is her second foray into commercial musical theatre; her first Cindy, was mounted last year as part of Campion College’s anniversary celebrations earned her an Actor Boy nomination for original score.

Working on Last Call, Armstrong reveals, has been a privilege and pleasure, not only because she is particularly enamored with the music and musicals of the 40s but also because it gave her an opportunity to work with an extremely talented cast and a band that has helped her to capture and reproduce the ambience and sound of the era.

Handsomely decked out in their period-relevant costumes, complete with accessories, the band featuring Armstrong on piano, comprises six additional musicians, a set of talented youngsters, five of whom were trained at the Alpha Boys School. They are: Adrian Harris on flute, Nevardo Reid on clarinet, Kemroy Bonfield on sax, Craig Henry on trumpet and Ezroy Brown on double bass. The seventh band member of is drummer Francois Brown, who regularly performs with the Campion College band, as well as the Nexus band and choir.

Patrons and cast members alike say that one of the major distinctive pleasures of Last Call hinges on the excellent musical accompaniment that they are treated to show after show by this enthusiastic and talented bunch. And there is no doubt that the end of August, when the curtains come down on the final performance for Last Call, impressive things will happen in succession for this gifted group of musicians and their dedicated leader.