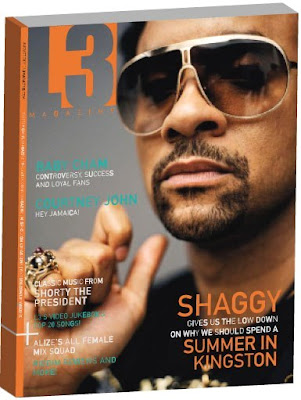 IN THE SHADES: The superstar gets real in new interview.

Quick reminder: Shaggy is as much an opinionated man as he is a charismatic entertainer. In a candid and revealing cover interview for the August issue of Canada’s L3 Magazine, the Grammy winner opens up about everything from the commercialization of Christianity to the concept behind his latest album to the frustrating negativity that continues to thwart reggae and dancehall from excelling further on the global stage. Below, a few excerpts:

On his spirituality and the church today:
“My spirituality is deep. I’m a Christian boy raised by a Catholic grandmother. I went to Sunday School, had my rebellious streak, but I still put God first. That’s how “Church Heathen” came about. To this day it is what it is. It’s bugged out when you look at pastors who are more blinged out than I am. These churches are not churches of communities. You don’t even know who the sister is sitting beside you. They have churches that have cash machines in them. It’s become a commercialized thing. It’s tax-free and about money. My spirituality is still there because that’s my connection to God.”

On dancehall’s biggest curse:
“We as dancehall [artistes] are not aligning ourselves with the corporate sector. When you have hip-hop artistes such as Lil’ Wayne going on tour, you have Coca-Cola, Kellogg’s and whomever that want to sponsor their tour and be a part of it. Nobody wants to do that for reggae because of the negative overtones, and they don’t want their family products to be involved with that.”

On promoting Jamaica in a positive light through music:
“In doing Summer in Kingston, I want to show the other side of [Jamaica]. You can’t have people thinking that when they come to Kingston they’re going to get shot. There has to be a balance!

On reinventing himself:
“At this point in my career I have to reinvent myself because that’s what you do. I have to come with a style that’s organic and credible. Still has to crossover, hence the tone of “Sugarcane"."