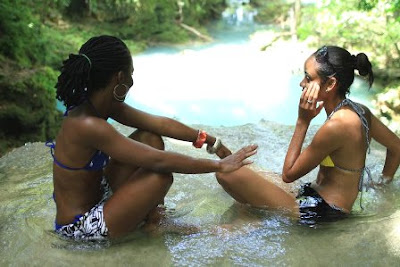 TREASURE ISLAND: Splash explores the best of the region.

Armed with the mandate of showcasing a fun and adventurous side of life in the Caribbean, amidst displays of the region’s warm denizens and wild beauty of the great outdoors, Splash returns to Centric this weekend for a terrific, action-packed second season that’s so teeming with exciting new must-see features it’s practically bursting at the seams.

Part travelogue, part lifestyle mag, Splash’s first season allowed global viewers of the BET-owned network to escape to the Caribbean, the ultimate go-to getaway spot on the planet, through their TV screens. More than anything, the hardworking team behind the show is intent on upping the thrill quotient this go-round. “It’s really an over-the-top show bringing the best of Caribbean lifestyle to the rest of the world, and it is the only show of its kind,” explains Kibwe McGann, the show’s creator, who works alongside co-executive producer and director Mykal Cushnie. “Last season we visited nine Caribbean countries, doing features on the best eats, beaches, hotels, and so on, while keeping it interactive, which is very important.”

According to McGann, a former supermodel who now works in television production with a steady focus on culture and entertainment (EMix, Magnum Kings & Queens), season two doesn’t stray from the original formula. Highlights include Trini Carnival 2011, Crop Over in Barbados and Dream Weekend in Jamaica. And expect artiste interviews and features with a host of regional powerhouses, including Shaggy, Rupee, Sean Paul and Rihanna.

To properly capture the Caribbean’s vast range of offerings, the show is hosted by three beautiful women across the region: Leah Marville (Barbados), Crystal Cunningham (Trinidad) and Tamara Ennis (Jamaica). “It’s like a really fun holiday,” says Ennis (also a stylist and journalist) of hosting the programme. “I’ve been meeting so many interesting people. I love that I get visit secret spots on my island that most people don’t get to visit – and show them to the world.”

Splash season two premieres Saturday, August 20 on Centric at 8:00 am. Repeats on Sundays at 2:00 am.

Get a sneak peek with this Season 2 promo: