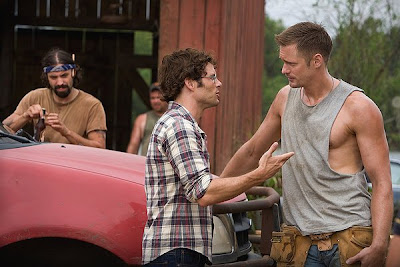 FACE OFF: Marsden (left) and Skarsgård in Straw Dogs.

In Straw Dogs, James Marsden is David, a Hollywood screenwriter who retreats to the small Mississippi hometown of his TV-actress wife, Amy (Kate Bosworth) to finish work on a script. The peaceful riverside environment is supposed to provide an atmosphere conducive to the creative process. But what unfolds in this frustratingly uneven remake of the 1971 psychological thriller (which starred Dustin Hoffman) is ferociously noisy, deeply disturbing and violently messy.

Upon the couple’s sudden return to the football town tensions mount, and it doesn’t help that Amy’s alpha-male ex (True Blood’s Alexander Skarsgård), contracted to carry out renovations on the couple’s home, is intent on rekindling the old flame. He couldn’t care less about Amy’s marriage and – along with his posse of filthy yahoos – begins to terrorize the young couple. At one point their cat is found hanging in the closet.

Writer-director Rod Lurie manages to start things off on sure footing with sly warmth, sharp visuals and breezy atmospherics, but the eventual absence of real character depth makes it hard for one to buy into the story, especially when the action approaches what is intended to be shattering conclusion where the couple fights back against their tormentors. It’s a strong cast (including James Woods as the town’s loose canon), but the performances are nothing to phone home about. As the star, Marsden’s turn, particularly in the film’s latter half, feels contrived.

This new Straw Dogs aims to give an education about standing your ground in the face of incredible odds, but by the end it’s a messy exercise populated by thinly-sketched characters making bizarre choices. Tyrone’s Verdict: C

Email ThisBlogThis!Share to TwitterShare to FacebookShare to Pinterest
Labels: At the Cinema, Films, Movie Reviews