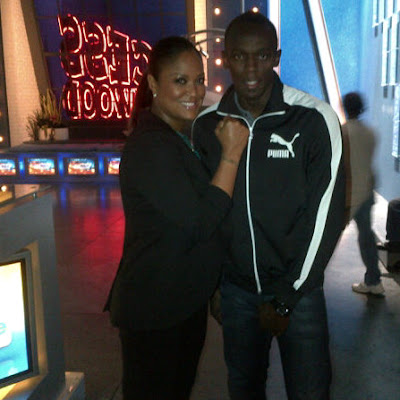 CHAMPS UNITE: Bolt poses with the boxer Laila Ali (daughter of Muhammad Ali) at the NBC studios.
No rest for the talented. On Tuesday, The World's Fastest Man flew to the States to conduct a clinic and share tips with aspiring athletes of the Mount San Antonio College in California. But the bonafide highlight of Bolt's overseas trip had to be his visit to the lavish studios of NBC for a taping of Access Hollywood Live, where he vibed with affable hosts Billy Bush and Kit Hoover.

The Puma spokesman, who will be honoured by the University of the West Indies with an honorary doctor of laws degree (LLD) in November, was in for a real surprise when Bush later challenged him a to a..... speed-walking race!

Catch the highlights below: