ANDREW’S HEAVY ‘LOAD’: Does PM Holness have the fight within him? 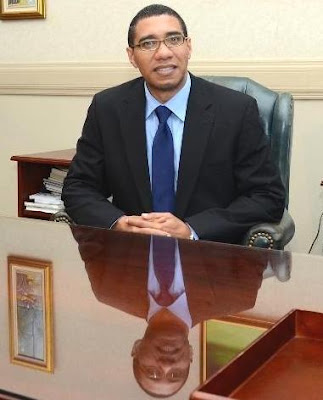 SEAT OF POWER: Holness takes on the role of a lifetime.

Even at 39, Andrew Holness strikes me as an obedient choirboy. With his refined features, quiet demeanour and polished air, he emits a musk of bespectacled likeability mixed with humility and the obvious smarts. But despite carrying the frame of a sturdy athlete, the 6’2” politician, to any observer, could be deemed “low-key” and a “gentle soul.” The Mr. Nice Guy sort, if you will.

But last Sunday, Oct. 23, Holness’ life forever took on a whole new dimension when he became Jamaica’s ninth prime minister – a colossal job that comes with the trappings of immense responsibilities, to understate it. As head of the Jamaican government, the youngest one in our history, he’s now swimming in the real deep, in treacherous waters with no shortage of sharks. No place for a Mr. Nice Guy. Will a different side to Mr. Holness now finally emerge? With the real tests ahead, does he possess the requisite heft that his new post demands?

By all appearances, as education minister since 2007 (and West Central St. Andrew MP since 1997), he’s led quite an uneventful political career, save for the occasional row with the island’s demanding teachers. He’s had it relatively easy, some would say. But for a vivid, compelling portrait of what is possibly in store for him as Prime Minister, he need look no further than his predecessor Bruce Golding, who eventually had to bow out of the marathon. Does Holness have the endurance?

Early detractors, most notably from the Opposition, have cited his lack of top-brass “experience” as an indicator of the level of performance he’ll give. But in his first address to the nation last Sunday, Holness admirably expressed his readiness for the maze of responsibilities that now rest on his medium-built shoulders. “Today, I take responsibility for the direction of this country,” he remarked. “Today, my generation must take responsibility for charting new pathways to fulfilling our destiny.”

All cynicism aside, there are many of us who share his faith in the future of Jamaica, a nation still being built, a country on the cusp of marking 50 years of Independence from foreign rule. As such, like Holness, we are deeply inspired by Jamaica’s possibilities. But, at the same time, we know all too well that our myriad problems can’t and won’t be solved overnight, and it takes a leader with guts and real decisiveness to keep us above water.

I fervently hope Andrew Holness is a fighter, one equipped with layers of thick skin for when the going gets tough and, like they say, push comes to shove in the war on garrison politics. We are rooting for him, of course. He comes to us with impeccable credentials and a great track record of serving the Jamaican people in whatever capacity. And certainly, over the course of his tenure, he will be out to prove that he’s no pushover choirboy or, worse, a lamb to the slaughter.

Like the rest of well-thinking Jamaica, Mr. Holness himself knows that youthful appeal and charisma will only get you so far in the world of politics – and elsewhere, for that matter. Sometimes what you need, most of all, is the grit and stamina of the long-distance stulla. After all, leadership is a heavy load. 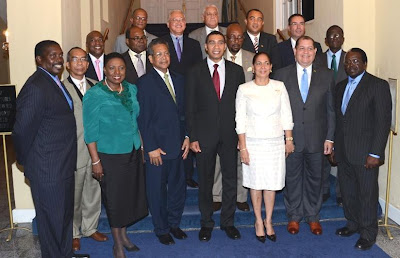 ALL THE PM's MEN (AND WOMEN): Holness and the new-look Cabinet.

Posted by TALLAWAH Magazine (tallawahmagazine@gmail.com) at 12:12 am