COMING ON STRONG: Denise Hunt breaking down the ‘Walls’ to self-fulfillment 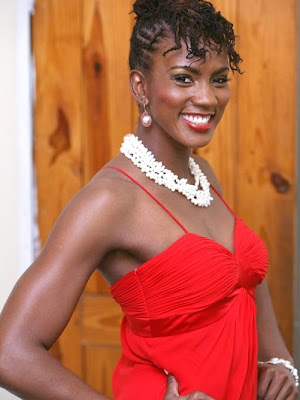 RED HOT: "When I hit the stage I realized that there’s a cleansing to be had from the experience."
Denise Hunt has always embodied a certain kind of insouciant cool that set her apart from peers in the media industry. Now, the TV star, fast-emerging fitness guru and courageous actress lands the role of a lifetime in the upcoming play If Walls Could Talk, directed by her good friend David Tulloch. The show, opening Oct. 14, is centred on a married couple grappling with, among other things, fertility and infidelity that rock their union to the core. It’s an ensemble piece – also featuring the likes of Winston Bell and Rosie Murray – which Hunt is approaching with relish and a sense of cautious optimism. Here, the buoyant actress talks about the new lead role, her love of all things fitness, and lessons she’s gleaned along her journey.

How’s it been getting back to that artistic place with the cast and director of If Walls Could Talk?
This cast is pretty cool, and it’s really fortunate for me. It’s just been instant chemistry with everybody, a lot of laughs and support. The last time I worked with [Winston ‘Bello’ Bell], I played his daughter, opposite Fae Ellington, and now I’m playing his wife, so that cracked us up in the beginning. Overall, it’s just been great coming from my last play Second Chance (also directed by Tulloch). It’s not been at all hard to find my footing. I think it’s been an easy tradition.

What drew you to the character of Jennifer Bailey?
Jennifer is now going through her sixth miscarriage, but at the end of the play there’s a big reveal that will surprise everybody. I don’t want to give anything away. However, what I don’t like about the character is that she is always lauding her husband over herself, and telling him things like how perfect he is. But that doesn’t mean that she doesn’t eventually stand up to him. There seems to be a little naiveté on her part, but she is fully dedicated to the relationship. Right now in rehearsals I’m still experimenting with the character, and I’m really enjoying it.

From the synopsis, the play seems set to deliver a potent message for audiences, but especially women.
It speaks very powerfully to family, and how we become family, while looking at real issues that affect everyday people. It also speaks strength to women who might not have had children of their own, those who have had to adopt, and just women in general. At the end, though, the right message comes out. It’s a nice little story (Laughs).

Why do you act?
I act because I don’t know how not to. I’ve been acting since I was seven years old. Growing up, I was so fascinated watching TV and seeing these women, and then when I hit the stage I realized that there’s also a cleansing to be had from the experience. If I didn’t have the chance to act, I don’t know how my life would have turned out.

Last time we spoke, you were celebrating the opening of your fitness centre SizzleFit. Bring us to up to date on that endeavour.
It’s been great, but it’s also been a real eye-opener about running a business. And it’s grown since the opening because I’d have a lot of referrals sent by other clients. About 90 per cent of the present clientele are referrals.

Have you always been a fitness devotee?
I’ve always been involved in fitness. In the past, I’ve done tae-kwon-do. The thing is, I’ve always been tiny; people used to call me ‘Finers.’ So in my pursuit of becoming bigger, weight training helped to pump me up.

Looking ahead, what’s next for you to accomplish?
I need to do some more travelling. I need some more little Denise Hunts (Laughs). I want a picket fence, and I want someone to say ‘Honey, what are we having for dinner?’ That’s what I want.

Interesting. Now, naturally, I have to ask ‘Are you currently dating anyone?’
No, I’m not dating at the moment. Right now I just have my work and my kid.

>>Denise’s Inspirations:
BOOK: Your Best Life Now by Joel Osteen. “Alaine gave me this book. And every day when I wake up and read it, it speaks directly to what I am going through. I call it the magic book.”
STYLE ICON: “I admire everybody because I think they each have such great style. I see Yendi, Terri-Karelle, Halle Berry, Whitney Houston, and I like how they always make a statement with what they wear. And I’m like ‘How do you make those jeans work with that top?’ (Laughs).
MUSIC: “I have a CD in my car, and there are two tracks that I play till they are scratched: Reuben Studdard’s “I Need an Angel” and Fantasia’s “I Believe.” I love that these songs speak about sending strength when you’re not able.”