IT'S COMPLICATED: Appealing cast bestows a winsome "Gift For Mom" 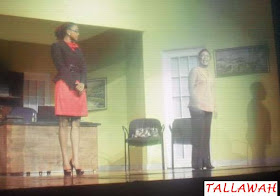 CASE IN POINT: Beavers (left) and HoShing.
While not exactly exposing revelatory truths about family and human relationships, A Gift For Mom (currently in revival in Kingston) is a supremely well-acted domestic drama that progresses at a moderate yet confident pace. Writer Basil Dawkins weaves a compelling saga, with just the right touches of humour, that delves into the often weighty struggles of single parenthood, alongside themes as readily identifiable as teenage angst and desperation, in recounting this tale of a boy on the cusp of manhood hell-bent on finding his biological father, even if he has to resort to manipulation and other devious techniques.

Visually, the production is lovely to look at, boasting a mis-en-scene marked by stylish walls, richly-textured hues and all-round eye-catching props. But the play’s real strength is the acting, with all four players turning in laudable work. For their first outing in the major leagues, newcomers Regina Beavers and Fontain Jones demonstrate promise at wholly inhabiting a character, especially young Mr. Jones, who brings an effortless charm and scene-stealing confidence to his part of Omahar Abrahams, opposite stage veterans Ruth HosHing and Alwyn Scott.

A Gift For Mom stars HoShing as overextended single mother Georgia Abrahams, freshly unemployed and raising a headstrong adolescent (Jones), who holds his mother to every promise she’s ever made. This unsurprisingly results in frequent standoffs between mother and son: He wants to go to flying school; she thinks becoming a pilot is no significant job; at 16, he longs to meet his dad; she chooses to keep the man’s identity secret.

Seeking the counsel of successful and posh attorney Hope Sinclair (Beavers), Omahar takes it upon himself to track down his father, who may or may not be the handsome airman Neville Sherman (Alwyn Scott, terrific), a charmer in the tradition of Denzel.

It’s a play riddled with dilemmas and complications for its well-drawn characters. But, if anything, it provides Dawkins and director Douglas Prout with ample room to produce a riveting sketch of modern family dynamics. For one, as an only child, Omahar (as portrayed by Jones) is an entitled little brat who loves and respects his mom but is not afraid to challenge her. As the mother shouldering the burden, HoShing responds aptly, with another admirable showing of her wide-ranging gifts as a thespian. (Can HoShing sing? I’d love to see her perform in a musical).

And I must add that the Little Theatre serves as a superb house for the production; spacious and extremely well-lit, it lends the atmosphere of something in the vein of Broadway. If only plays were mounted there more frequently. Thankfully, Mr. Dawkins had the good sense to choose this location, as it offers a wonderful setting for the action in his play to unfold and explode at leisure with room to spare.

As for the play itself, we don’t exactly know how the story ends; the conclusion sets things up for a sequel, which one might assume is the upcoming Where Is My Father?, opening Dec. 27. Theatregoers will, naturally, be anticipating that Dawkins sustains the realistic and wholesome depiction of human relationships and family ties. Tyrone’s Verdict: B+ 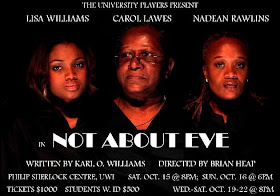