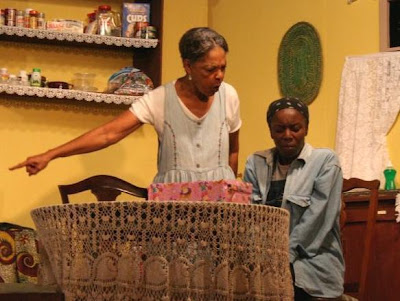 FAMILY MATTERS: Forbes (left) and Solomon dazzle in 2006's 'night, Mother.
Depending on who you ask, the terrific pairing of Leonie Forbes and Makeda Solomon in 2006’s superb revival of the stage classic ’night, Mother remains the gold standard when it comes to mother-and-child combinations in dramatic works on the Jamaican stage. From the sure-footed exploration of maternal tendencies to the overwhelming pressures and frustrations of dealing with an overbearing parent, the Fabian Thomas-directed production provided an in-depth study on the dynamics that usually exist between a mother and her offspring, whether grown-up or on the cusp of adulthood.

Forbes, of course, went on to win the Actor Boy for the extraordinary portrayal of a woman who is stunned into a state of desperation to hear her daughter confess that by the end of the night she will commit suicide. Solomon, as that despondent daughter, was elegantly tragic and terribly convincing. So far in 2011, theatregoers have witnessed a surprisingly vast array of well-acted productions, featuring mothers and their children going at each other’s throats as they clash over everything from diverging viewpoints to dashed hopes and deferred dreams for which they hold each other responsible.

Heading this list is A Gift For Mom’s Ruth HoShing (pictured below) as a career woman with a secret – and a son (confident newcomer Fontain Jones) who takes her to task over the absent father figure, leading to the involvement of a lawyer (Regina Beavers). The frequent quarrels between mother and son aren’t of the violent variety, but one still senses the innate ruthlessness of the characters. 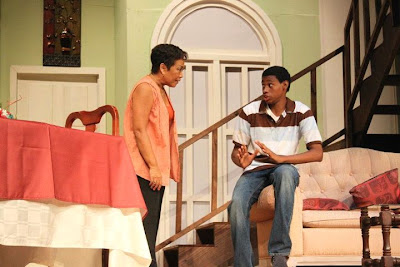 Much of the same goes for Dahlia Harris and Sabrena McDonald, whose combined raging and railing over a family scandal-in-the-making almost reaches tragic proportions in God’s Way. With this frequently gripping mother-and-child scenario, however, it’s largely a case of logic and law versus a commitment to honour and loyalty to family.

Faith Gordon and Julene Robinson were riveting in the throes of their domestic spats in Hairpeace (also directed by Fabian Thomas) while, somewhat by contrast, Barbara McCalla and Zandriann Maye’s characters in the warmly-received Stop Dat Train seemed to enjoy a relationship low on fuss and drama. As Belinda Reid and Trudy Bell in the middling comedy Adopted Child, one is able to understand that, to large extent, it’s a situation where the mother is working feverishly to adapt to the daughter’s eccentricities, with moderate success.

But the sparks certainly fly with vim – and from all angles – in the all-star Not About Eve, which runs a close second to ’night, Mother with its relentless focus on issues surrounding womanhood, identity and the real meaning of family. Dorothy Cunningham, Sabrena McDonald and Karen Hariott’s excellent showing in the 2006 original inspire similarly fascinating work from Carol Lawes, Lisa Williams and Nadean Rawlins in the new University Players reincarnation. Filled with moments of anger and others of quiet revelation, the play strongly makes the case that when it comes to mother-and-child dynamics, emotions will always run the gamut from A to Z.