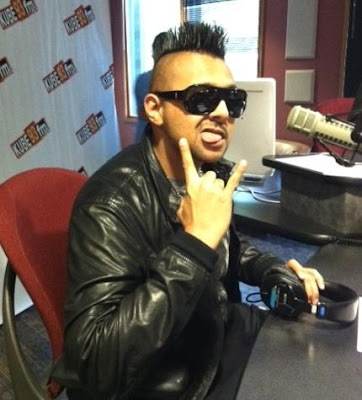 BLACK OUT: "I am now the tree that bears the fruit. I'm not the roots anymore."
Expanding his sound in a new direction is perhaps foremost on Sean Paul's mind as he completes work on his eagerly awaited fifth album, which finds the multi-platinum star joining forces with several of the industry's top go-to talents and hitmakers. In an interview with the Huffington Post earlier this week, Sean Paul revealed that among the industry peers he has tapped for the album (due February 2012) is another ex-Destiny's Child bandmate.

"Kelly Rowland has been someone I've wanted to work with for a long time. We were touring in Australia last year, and it was a great opportunity," Sean Paul explained. "Akon was on that tour and worked with me on the album. Production-wise, DJ Ammo, a dude who has worked with the Black Eyed Peas, and Benny Blanco, an amazing pop producer, are working with me."

The results so far have been eye-opening, he said. "They're amazing and have gotten me to do things I've never done before. High pitch, basically. There'll also be one or two surprises."

Meanwhile, the superstar entertainer points out that while he has held on to aspects of his past musical styles, certain elements of his arsenal have been dropped to make way for new ideas. "The topics haven't changed much. The production style has changed. Stargate and Benny Blanco I've never worked with them, so it'll be dance music from their perspective. Blanco is more pop-oriented and that's what my music is," he said.

And though he has had to incorporate many non-Jamaican elements in the music as he seeks to reach new audiences, Sean Paul is quick to refute any claim that he is turning his back on his roots. "A lot of people say I'm forgetting my roots, but I was the roots. I say to them -- I am now the tree that bears the fruit. I'm not the roots anymore," the deejay asserted. "In my present position, If I stay on the ground I'd be dead. I want to continue doing what I'm doing so I'm expanding my sound in that direction."