THROUGH THE STORM: Realistic God’s Way is a path worth travelling 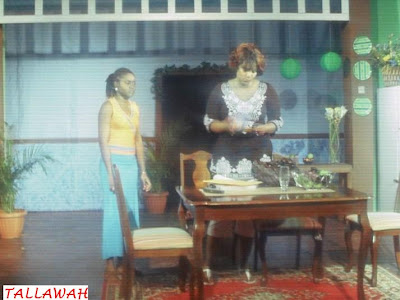 MOMMY DEAREST: Harris (right) and McDonald.
It is a truth universally acknowledged for many Christian zealots that one never questions certain things, chief among them "God’s work." You simply count your blessings and be grateful. But what happens when the true source of your good fortune causes you great shame – and is nothing short of scandalous? You can imagine Valerie’s deep shock when it hits her smack in the face that essentially she’s been living a lie; the source of much of her material happiness is the sort of thing that can irreparably ruin reputations and lives.

As the new kitchen-sink drama God’s Way relates, Valerie (Dahlia Harris), a feverishly Christian woman raising college-aged daughter Georgia (Sabrena McDonald), is jolted to the core upon discovering that her husband, who has been providing for the family through his work in the States, has really been involved in dangerously illicit activities for years. Caught by the authorities, he has been hauled off to prison. The news naturally sends shock-waves through the mother-daughter household, whose veneer of a quiet, pleasantly perfect existence is painfully ripped to smithereens to reveal shocking skeletons, while forever changing life as they know it.

Penned by Harris, who operates under the now-familiar quadruple-threat banner of writer-director-producer-star, God’s Way is a frequently absorbing domestic affair that examines everything from faith, fractured friendships and mother-daughter relationships to trust, resentment and crime and punishment. The overall results, though, are mixed. While it is highly laudable how Miss Harris ratchets up the intensity as the play heads to a near-devastating conclusion, there are moments that come off as excessively talky and others that linger far too long in the melodramatic. Fortunately, though, the power of the play’s message – and Harris’ timely agenda to offer a blunt exposé on the lives of Christians – is never compromised.

On stage, Harris comes up short on the emotional authenticity that the role of Valerie calls for; it feels like she's holding back. But for what she lacks in that regard she adequately compensates with commanding presence in the play’s more explosive scenes where she either clashes with Georgia over the details of the husband’s predicament or share tense moments with the remaining two ancillary characters: longtime gal pal and chatty church sister Samantha (Trudy Campbell, commendable) and Ainsley Whyte, who very smartly portrays their thoughtful yet no-nonsense deacon. For the most part, McDonald is good at conveying Georgia’s anger, extreme anxiety and the deep-seated frustrations of sharing space with an overbearing parent.

On the more technical side of things, the set, which depicts the living room and dining quarters, is exquisitely done, reflecting Valerie’s taste for the finer things. And under the regularly bold lighting, the place truly comes alive.

Overall, shortcomings aside, God’s Way doesn’t skimp on its exploration of human behaviour, class and the price of dignity – and how we rise to face thunderstorms, which will ultimately determine if we perish or prevail. Tyrone’s Verdict: B

>>SPOTLIGHT:
One of the implicit joys of watching the new Christian-baiting drama God’s Way is the outstanding

performance from Ainsley Whyte, who digs deep into the gratifying supporting role of Deacon to produce a compelling and award-worthy display. Whyte, whose previous stage credits include 2009’s No Compromise, nails the part of the supportive church man (down to the neat attire), while connecting fully not only with his cast but also with those who paid to be moved and entertained.