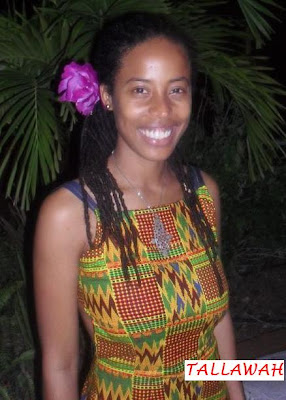 HOME GROWN: "Everything excites me because I’m right in the middle of a revolution."

The wise saying that we must first be the change we want to see is an idea that resonates deeply with Donisha Prendergast, whose is simply overflowing with fervour and youthful vim and philosophy beyond her years. Warm and ethereal, Prendergast has brought her clarity and soulfulness to an exciting series of culture-related initiatives, not the least of which are the Manifesto Jamaica Festival, where she emerges as a sort of youth ambassador, and her first documentary, Rasta: A Soul’s Journey, which took her across the globe (Ethiopia, Israel, India...), conducting interviews centred on the impact of Rastafarianism. It’s anyone’s guess what Prendergast will take on next, but for now she refuses to limit what she’s capable of delivering.

TALLAWAH: What’s the latest on your documentary, Rasta: A Soul’s Journey, that’s been the subject of incredible buzz?
Prendergast: It hasn’t been released into theatres as yet, but we’ve been doing film festivals. We premiered at the Montreal Film Festival during the last week in October. It was a full house. The theatre manager had to bring in more chairs, and people were still sitting on the floor because it was the last show, and they didn’t want to miss it.

TALLAWAH: Why was it important for you to bring this project to life?
Prendergast: As a young person growing up in a Rastafarian family, you see images and you associate yourself with it because you want to understand your identity, but as you grow older you realize that the things that you learned and the things that you thought were you are not you. So it’s a personal journey. I don’t want to use the word search. But I guess it’s an acceptance of who you are, in a sense. I come from the Marley family, and I didn’t know as much as I thought I knew about Rastafari as I thought I knew. You assume that you know, but as you start to read into things you realize that you don’t know.

TALLAWAH: Manifesto Jamaica is being hailed as a tremendous enterprise and a supremely important step towards forging a stronger bond between Jamaican young people and their culture. How do you feel about what the festival’s been achieving?
Prendergast: It’s necessary, because if you’re not a part of something then what are you doing? We can’t stand aside and watch what our leaders are doing with our country. And I’m not just talking about politicians. I’m also talking about music, corporate Jamaica, people who are making our food. So with an organization like Manifesto Jamaica I’m building my nation but I’m not doing it by myself; I’m doing it with other young people.

TALLAWAH: I imagine you’re equally passionate about playing a role in the preservation of your grandfather’s legacy.
Prendergast: I am, but it’s not just about building Bob’s legacy but understanding what he stood for. In preserving Bob’s legacy, I want to help people understand who the man was. And that’s a big thing for my documentary. One of the biggest things I discovered about him was that he didn’t set out to change the world. He was just a ghetto youth going through a lot of things, and he found a way to express it.

TALLAWAH: Have you settled on your next passion project?
Prendergast: Honestly, I put no limits on what I can do and what I want to do. When I look into the future, I see too many things. Jah has shown me that I can do anything I want to do. So in the next couple of years, I’m going to do everything that I want to do, which means writing films, having children, and changing the world in the best way that I can.

TALLAWAH: On the cusp, as we are, of Jamaica’s 50th year of Independence, what excites you most about the culture?
Prendergast: Everything I see excites me because I’m right in the middle of a revolution, and art is at the centre of that revolution. It’s like Bob Andy said, he is looking for a lot of things from my generation because the times have never been so great.

Posted by TALLAWAH Magazine (tallawahmagazine@gmail.com) at 3:18 am

Email ThisBlogThis!Share to TwitterShare to FacebookShare to Pinterest
Labels: Ones To Watch, TALLAWAH Exclusive, The Marley Files