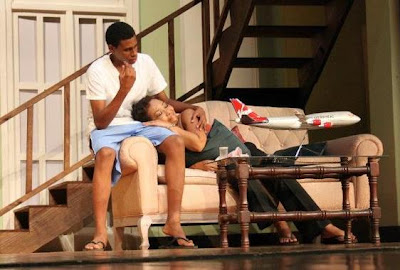 THE GOOD SON: A Gift for Mom's Fontain Jones and Ruth HoShing.

At least six shows within a four-week period.

That’s the minimum requirement local theatre productions must meet so as to quality for Actor Boy nomination, according to new information from the awards committee in response to a recent TALLAWAH article. Personally, I was always under the impression that shows must run for at least two complete weekends in order to make the cut, but apparently that's no longer - or never was - how things go. (How marvelous it is to be properly informed!)

Great news then for the terrific domestic drama A Gift for Mom (which ran from Oct. 5 to 9), as it possesses the necessary credentials.

Criteria for assessing different categories of theatre may vary according to specific genre:
(i) A performer having only appeared the following year in a previously judged production may be judged based on it being a new performance. The production and elements such as set, music etc unless substantially changed shall not be again eligible.
(ii) A production remounted by the same production house or by principals of said, the following year as previously judged shall not be eligible.
(iii) New productions of previously mounted shows are eligible for ALL awards EXCEPT ‘New Jamaican Play.’