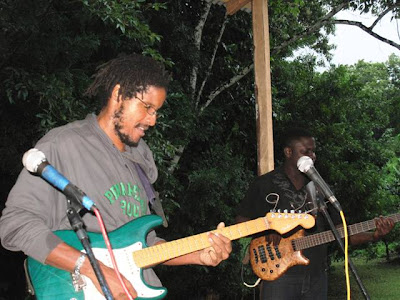 'JAM' SESSION: Members of the live band thrill the crowd.

The significance of the 69th anniversary of the birth of the man who had a hit called “If 6 Was 9” did not go unrecognized in Jamaica. The first-ever staging of Jimi’s Jam, in memory of the world’s greatest ever guitarist Jimi Hendrix, saw a small but appreciative audience in attendance at the event, staged at Asante Adonai in Winefield, St. Ann. Hendrix lovers were treated to original recordings on vinyl, works by other artistes interpreting Hendrix classics, documentaries on the man’s life and work — and live performances from guitarists Omar Francis and Maurice Gordon, drummer Akil Karram and bassist Sherwayne Thompson. 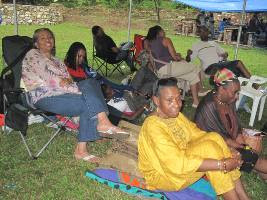 “Jimi’s Jam was coordinated on a ton load of love and passion but with a very limited budget in terms of financial resources, time and human capital,” explains chief organizer Leahcim Semaj. “The intention of this year’s staging was to provide Hendrix aficionados with an opportunity to be immersed in the music and to share the music of the man recognized by Rolling Stone magazine as the greatest guitarist ever.”

By all accounts, attendees had a blast at Jimi’s Jam. “The vibe was good. I particularly enjoyed the live jam,” says Sharon Bogues Wolfe, Director of Alumni and development at Mico University. “The artistes whilst performing Jimi’s work added their own creative flair to the numbers. The food was fresh, tastefully presented with a delightful twist.” 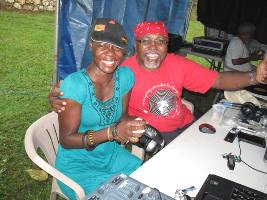 As Semaj notes, he and his team were pleased with the turnout, especially since it was being staged for the first time. “The success of an event is not always about the number of patrons. The target was to have 50 to 75 persons on location for the first staging, and we made the 50 plus head count.”