Fielding questions on everything from debt management, growth strategy and poverty to education, corruption and homophobia, the JLP’s Andrew Holness and his PNP counterpart Portia Simpson-Miller met in a lukewarm (if anti-climactic) hour-long debate on Tuesday night to essentially give prospective voters in the Dec. 29 General Elections a sturdier understanding of their candidacy for the coveted title of Next Political Leader of Independent Jamaica. A primer of the issues and answers:

On the Dudus/Manatt fiasco:
Holness admitted that the issue “was not handled in the best way, and we have paid the consequences. But steps are being made by the [JLP] to redeem itself.”
Simpson-Miller countered: “It was a result of bad management and political favouritism. The [former] prime minister should never have inserted himself in the matter in the first place.”

Homophobia and the buggery law:
Holness reiterated that such issues remain extremely sensitive and polarizing, but “we are an open society and the issues that are difficult to discuss are being discussed.”
Simpson-Miller quickly asserted: “Our administration believes in protecting human rights. No one should be discriminated against because of their sexual orientation. The government should protect. We have to look at the buggery law.” She went on to say, “I do not support the position of the former Prime Minister [Bruce Golding]. People should be appointed [to public office] based on ability and not based on their sexual [preference].” 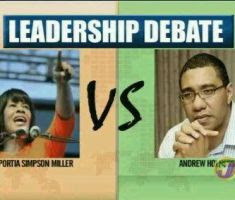 Financing tertiary education:
Holness confessed that this has been a “challenged area for both administrations. It is such a controversial and potentially explosive thing.” The prime minister added that widening the resources available for college students is a matter his government has vowed to do. “It’s a fundamental change that has to happen.”
Simpson-Miller responded: “My administration will expand [the offerings of] the Students’ Loan Bureau and review the requirements, so more students will have access to their education.”

Fighting poverty:
Holness said it is crucial that the JLP government “continue, with greater intensity, granting access to education” and maintain the position of free access to health care. “There is no other solution,” he concluded.
Simpson-Miller pointed out that “job creation is critical in this country. We are in a crisis. We need to ensure employment for our people.”

Vote for me:
Simpson-Miller stressed that the People’s National Party is interested in, among other things, the expansion of educational services, focusing on SME’s and improving relations with the IMF. “The country must choose an experienced leader,” she said. “A leader that the people can trust.”
Holness, meanwhile, made it clear that he understands “the frustration” and the myriad of national problems and has the requisite determination to solve them. “I see glimmers of hope in our economy…and action is being taken to stomp out corruption,” he said. “I believe we can end poverty, have universal education, and build a loving, caring society.”

Posted by TALLAWAH Magazine (tallawahmagazine@gmail.com) at 11:41 am