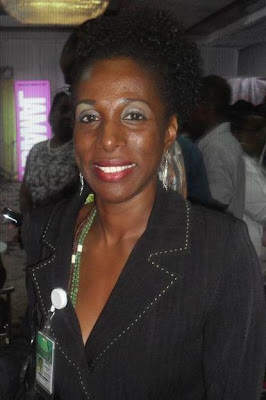 KAREN'S CHOICE: Harriott on her career in theatre and television.

If there is one thing that struck me about Karen Harriott it’s that among local actors she stands out as a specialist of inhabiting searing dramatic roles that fully give wing to her serious knack for mesmerizing intensity and transcendence. Her stage roles in particular have been brilliantly diverse, but none leaps more immediately to mind than the ambitious, career-driven Katherine Shields from the original 2006 production of Karl Williams’ Not About Eve, which only this past October came in for an excellent revival at UWI Mona by director Brian Heap and a cast comprised of Nadean Rawlins, Carol Lawes and Lisa Williams.

Harriott, whose résumé ranges from gratifying stage parts (Love and Marriage and New York City) to memorable TV gigs (Royal Palm Estate), has been out of the spotlight for some time, but I am happy to report that she is keeping her cultural fire burning as the Administrative Director at the Jamaica 50 Secretariat (in the Ministry of Youth, Sports and Culture). Last Tuesday evening, TALLAWAH bumped into Harriott at the Jamaica Jazz & Blues launch inside the Wyndham ballroom and got her to offer up her thoughts on the Not About Eve revival – and the legacy of Miss Tiney Winey.

TALLAWAH: Did you catch the recent revival of Not About Eve? What did you make of it?
Harriott: Yes, I did. I thought it was refreshing. But some things were different. There were things I

liked more in our production, and some things I enjoyed in the revival. I especially liked the direction. Aspects of the script were changed, but I liked the general direction. But what I loved most about my production was the synergy of the actors. In my production there was a better synergy in terms of the relationships, which were more understandable. As for the development of the characters in the revival, I found some of it not as smooth as I would have hoped.

TALLAWAH: What do you cherish most about being a member of that superb acting trio in 2006?
Harriott: Myself, Sabrena and Dorothy Cunningham, we just had a fantastic relationship. As actors, we were people first, and we understood clearly our roles. We knew people who were these people and because of that it was easier for us. And we understood the nuances of the characters so all three of us were able to give performances with a lot more intensity.

TALLAWAH: Unfortunately, we haven’t seen you in action in such a long, long time. Will you be returning to theatre anytime soon?
Harriott: Right now I am with the Jamaica 50 Secretariat as the Administrative Director. And we are in charge of the celebrations for the year. I am extremely busy, so I don’t think I’ll be able to go onstage for the next year or so.

TALLAWAH: In the meantime, I imagine you have nothing but great memories of portraying that other vibrant character from your past, seductress Tiney Winey – one of the most unforgettable in Jamaican TV history.
Harriott: I have wonderful memories of the character [on Royal Palm Estate] because for one I had never before played a role like Tiney Winey. So from an actress perspective it was very interesting. I liked it because I had to go outside of myself to bring this character to life. And I find it so interesting now that all many people say when they seem me somewhere is that they like ‘Tiney Winey.’ When I started doing the research to play the character it was so much outside of my space and my reality. So to come to place where people see me as Tiney Winey, I find it very interesting.