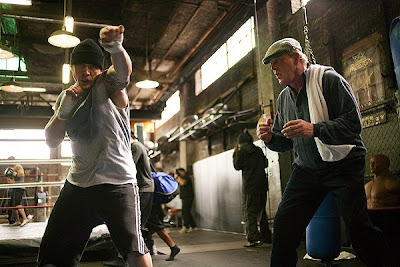 WHAT ABOUT NICK: Nolte (right) delivers one of his best in Warrior.

With a leading six mentions for next January’s 69th Golden Globe Awards, The Artist continues to distinguish itself on the road to the Oscars. But competitors like George Clooney’s The Ides of March and the ’60s racial tale The Help are keeping close pace on the trail, securing five nods each. Meanwhile, I am delighted to see the great Woody Allen return to the spotlight with two nods for Midnight in Paris, and leading man of the year Ryan Gosling getting his due with a pair of well-deserved acting nominations.

Among the snubs people can’t stop talking about: the omission of Melissa McCarthy’s outrageously hilarious turn in Bridesmaids. But I’m far more concerned that Nick Nolte, incredible in Warrior, was overlooked. His performance as an alcoholic father on the road to reform is simply award-worthy. The Globes will be handed out Jan. 15 during a ceremony hosted by the returning Ricky Gervais.

Best Comedy/Musical: 50/50; The Artist; Bridesmaids; Carnage; Midnight in Paris; My Week With Marilyn

>> More Awards Season: The Help is boss among SAG nominees

Posted by TALLAWAH Magazine (tallawahmagazine@gmail.com) at 11:06 am