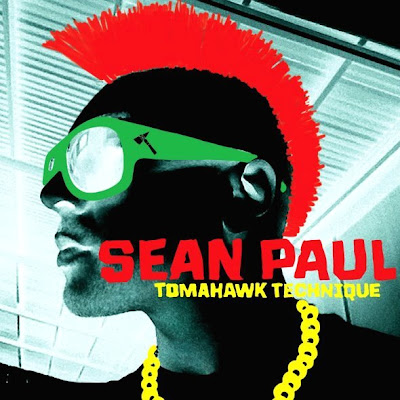 Sean Paul’s stash of holiday gifts for his fans has so far included dropping the stylishly impressive 10-minute visual for his Material Riddim Medley. Now, the Grammy winner is unveiling the shocking cover art for his latest studio album, Tomahawk Technique (Atlantic Records).

For me, the name of this album will certainly take some getting used to, but the cover image – an eye-popping blend of psychedelia and bold, graffiti-esque artistry – seems a perfect visual representation of the alliterative title.

Content-wise, among the 12 tracks on the upcoming CD are the Kelly Rowland-assisted “How Deep is Your Love”; the summer chart-climber “Wedding Crashers”; and the new sizzler “Roll Wid Di Don.” The energetic club hits “She Doesn’t Mind” and “Got 2 Luv U” (featuring singer Alexis Jordan) already serve as indicators of what listeners can expect.

Tomahawk Technique is slated for a Jan. 27 release in France, Belgium, and Switzerland. It will be available in Germany and Austria on Feb. 10, and in the UK and Ireland on March 12. An official US release date will be finalized in the coming weeks.