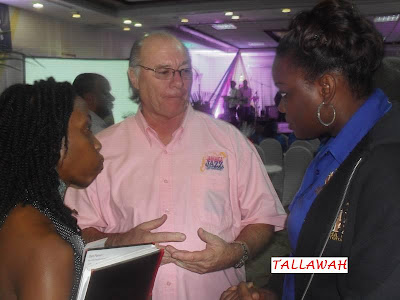 “Sweet 16 on the golden anniversary of Jamaica’s independence.” That’s exactly how the upcoming iteration of the Jamaica Jazz & Blues Festival has been branded, a melding of two monumental milestones. The new-look Art of Music Productions (AMP), led by the ever-reliable Walter Elmore, is the team behind the upcoming staging of the three-night affair.

The spacious Wyndham ballroom in New Kingston on Tuesday served as the perfect hosting spot for the local launch of the Fest, slated for Jan. 26-28, 2012 at the Trelawny Multi-Purpose Stadium. In the gorgeously adorned space, complete with slender drink stands, super-sized TV screens, plush-white couches and sponsorship banners, attendees mingled and jived to live music from a pair of live bands over cocktails and nibbles.

Fresh-faced compere Regina Beavers, admirably spreading her wings these days, proved satisfactorily delightful behind the mic, moderating the flow at a nice pace. Things got off to a super-late start (over an hour behind the announced 7:00 pm), but if people were at all put off by the organizers’ tardiness, they didn’t show it. The chattering crowd swelled as the evening hit its stride, culminating in a series of performances, presentations and announcements.

> Joining the 2012 party: Funk-soul brother Cee-Lo Green, dancehall megastar and 2012 Grammy nominee Shaggy, as well as a revised Temptations, have all been confirmed as the latest additions to the performance lineup, joining a starry field that includes headliners Celine Dion and Kelly Rowland. Word is more surprise additions are to be announced in the coming weeks.

Posted by TALLAWAH Magazine (tallawahmagazine@gmail.com) at 2:23 am