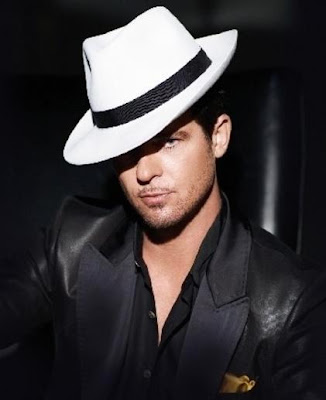 Robin Thicke bristles at the label of blue-eyed soul singer. He’s constantly made as much clear in interviews with the press. It would appear that Thicke falls among that lot of entertainers who pride themselves on defying categorization. But if his musical output these past few years is any true indication, he really doesn’t confine his artistic expression to any singular genre.

The man behind such seductively orchestrated career hits as “Lost Without U,” “Magic” and “Shooter” (with Lil Wayne) is largely given to serving up an eargasmic blend of contemporary R&B, old-school funk, pop and traces of other spirited sounds that dually sets off his charm and highlights 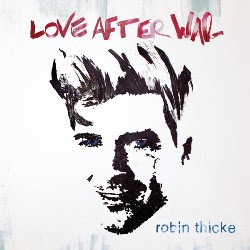 his smoother-than-butter tenor. In short, Robin Thicke’s music is awash with vibrant colours – not just blue.

Witness his newest CD, Love After War, another mesmerizingly groovy, hit-laden sample of the odyssey he’s making. Mostly, it’s a man properly schooled in the art of seduction and completely in love with his woman that emerges on this album. After all, the album is thoughtfully titled Love After War. No doubt Thicke continues to feed his craft by drawing inspiration from his loving marriage to Paula Patton, who can be seen onscreen in the latest instalment of the Mission Impossible movies, as well as the video for the single “Love After War,” a tender, sexy reminder that love does conquer all.

With this album, Thicke has notched another winner. From the low-key appeal of “Never Give Up” and “All Tied Up” to the lingering pulse of “I’m An Animal,” Thicke puts in work that yields impressive results. Tyrone’s Verdict: B+