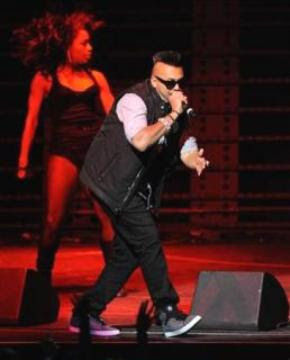 After months of teasing fans with bits of details about his long-awaited fifth studio record, Sean Paul has (finally) disclosed that the album, due out in early 2012, is called Tomahawk Technique. A reference to his lush, spiky hairdo? Maybe.

Though the Grammy winner didn’t indicate his reason for giving the record such a surprisingly curious title, he remains certain that the contents will not only entertain but also pleasantly surprise his core fanbase – while introducing new listeners to his brand of pulsating dancehall-pop.

Speaking with Reuters last week in Los Angeles, Paul said he does a bit more singing on the album which includes collaborations with such international talents as Kelly Rowland (“How Deep”) and Alexis Jordan (“Got 2 Luv U”). “There's a broadening of my artistry; I'm working with other producers and artists I've never worked with,” he said. “What's going to surprise fans is that there's a lot more singing, more high notes that I never used to do before. It's a mixture of pop music into dance music.”

Tomahawk Technique is a follow-up to 2009's Grammy-nominated Imperial Blaze.

For the new CD, Sean Paul has teamed up with hitmakers Rico Love, Benny Blanco and Stargate, who have produced smashes for the likes of Katy Perry, Justin Bieber, Rihanna and Natasha Bedingfield. In addition to Rowland and Jordan, Paul also collaborates with a yet-to-be-revealed R&B brother. “It's [for] a song written by Rico Love. We're getting an R&B dude on it, but I'm not telling who it is yet,” he said.

In the meantime, the star-packed Material Riddim, which Sean Paul co-produced, is now available for purchase on iTunes.