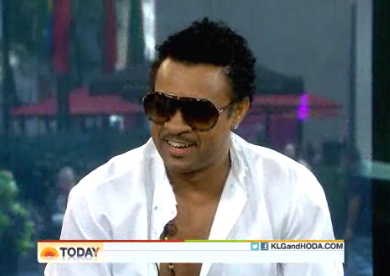 IN THE FRAME: Shaggy visits the NBC Studios.

"It breaks down all barriers, in any language. It's global," observes Shaggy, in reference to reggae's special worldwide appeal. "It's brand reggae. It's brand Jamaica. They're co-factors, and you just want to be a part of it."

The Grammy winner (and unofficial cultural spokesman) was at NBC on Monday to perform his reggaefied version of the standard holiday tune "Little Drummer Boy" on The Today Show, as part of the network's December concert series. Appropriately attired in the colour of the season, designer shades, and a healthy-looking crop of curls, Shaggy's performance (lively and full of the star's trademark vim and vigour), went over well with the cheery crowd. "Jamaican Drummer Boy" is now available for download via iTunes.

Here's a clip of the live performance:

Visit msnbc.com for breaking news, world news, and news about the economy