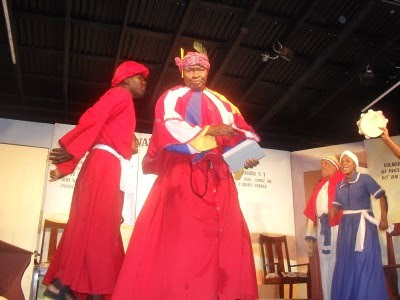 IN THE ACT: Known for vibrant comedies, Stages upgrades to a bigger space.

For local theatregoers, this Friday, Dec. 2, will be special for many reasons, not the least of which is the grand official opening of the Stages Theatreplex in New Kingston, the first-ever multiplex theatre not only in Jamaica but also the wider Caribbean.

And who better to first grace the stage than living comedic legend Oliver Samuels, who as it happens, is presenting his debut writing effort, Who Ah Di Don?, which he also stars, alongside Audrey Reid and Ruth HoShing.

The opening of the spacious theatreplex also coincides with a long-in-coming relocation move by Stages Productions, who formerly operated at Cargill Avenue’s Green Gables Theatre. For the production company – creators and promoters of some of Jamaica’s funniest theatrical productions in recent years – the new theatreplex represents a step up to much larger holdings.

Boasting multiple facilities, the location contains two operational theatre houses, as well as entertainment and lyming facilities (lounge and open-air deck). It is constructed to accommodate two different productions running concurrently. The facility has a large seating capacity that hosts over 400 patrons on show nights. The space also houses a bar and lounge that will cater not only to theatregoers during and after showtime but also to the general public throughout the course of the day. This space is also available for rental for special occasions.