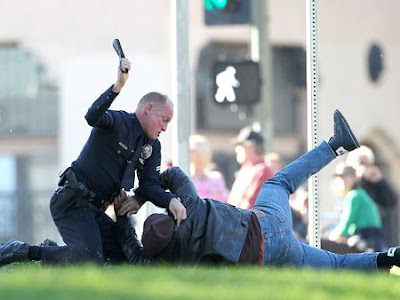 BRUTAL FORCE: Harrelson gets his point across.

Though Harrelson has given superb, emotionally charged performances in previous films like 2009’s The Messenger (for which he received a Best Actor Oscar nomination), here he achieves an almost transcendent exhibition of his dramatic chops and his propensity for the intense and menacing. In short, it’s a mesmerizing tour-de-force that could land him back in the Best Actor race. 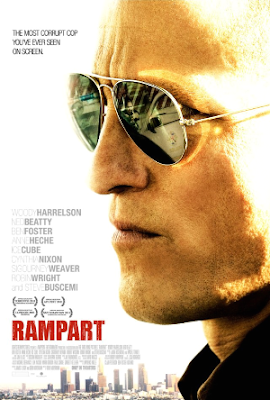 As for the film itself, a probing look at corruption and police violence, family and the challenges of juggling career and parenthood, Rampart benefits significantly from solid writing and knowing direction. Interestingly, the movie happens to be a reunion of sorts for Harrelson and Messenger director Oren Moverman (who co-wrote the script with James Ellroy).

Harrelson, who also reteams with Messenger co-star Ben Foster, stars as Dave Brown, a dirty Los Angeles cop of the grimiest kind balancing work with a home life fraught with tension (he has two ex-wives), who becomes embroiled in the infamous Rampart corruption scandal that rocked the LAPD.

An estimable cast of supporting players – Sigourney Weaver, Robin Wright, Cynthia Nixon, Ice Cube, and Anne Heche – contributes to the overall pull of the film, which is captivating and engaging throughout but ultimately lacks the power to break any new ground in the dirty-cop sub-genre.

Instead, Rampart is an excellent vehicle for its leading man who responds to the requirements of his part with dazzling brilliance and unstoppable energy. But Harrelson’s Dave Brown is not just some testosterone-driven meathead of a policeman; he’s also the father of two young daughters who begin to lose faith in the man they once idolized. It’s an outcome that hits him hard.

In the supremely capable hands of Harrelson (a hoot in Zombieland), Dave Brown is compellingly, more than anything, a man caught in a life-and-death wrestle with his personal demons. Captivatingly terrifying and hugely pathetic, it’s truly something to behold. Tyrone’s Verdict: B+

Posted by TALLAWAH Magazine (tallawahmagazine@gmail.com) at 12:58 am