TROUBLE IN THE FAMILY: Laugh-ridden ‘Don’ loses its way 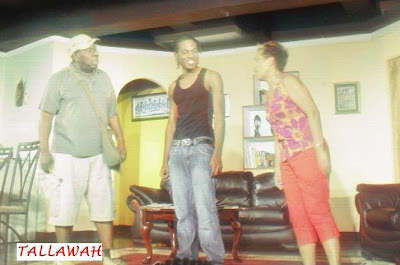 Given his storied reputation, it is virtually impossible to take in a performance featuring Oliver Samuels and not crack up – even once. Buoyed by his larger-than-life stage presence, the comedy kingpin has managed to have that effect on folks everywhere, down to the toughest cynic, for decades. Not much is different these days, which finds Samuels making his writing-producing debut with Who Ah Di Don?, a comedic stretch of a family saga that though commendably and amusingly written in parts is frustratingly uneven as a whole.

Helmed by actor-turned-director Peter Abrikian and featuring an estimable batch of talents, including Samuels himself, the play has no shortage of bait to induce mass laughter and the premise is believable, but by the end you find that it doesn’t achieve much by way of moments of revelation or ample characterization.

Samuels heads the cast as Joshy, an aging country-bumpkin in detail (down to the curious bag slung across the shoulders) who arrives in Kingston to help quiet a series of unsettling developments that threaten to permanently disrupt the lives of his middle-aged sister Sylvia (Audrey Reid in a rib-tickling grey-and-white wig) and wayward teenaged nephew Malcolm (Brian Johnson doing his best baby gangster).

Deeply family-oriented and awfully considerate, Joshy comes in for a rude awakening when he discovers the true source of Sylvia’s and Malcolm’s woes. Energetic Ruth HoShing, looking like a temptress of 25, rounds out the cast as close family friend Debbie, a manipulative she-devil type who has set her cougar eyes on young Malcolm behind Sylvia’s back. That can only bring trouble and you know it won’t end well.

Dealing with everything from betrayal and community crime to middle-class pride, family skeletons and the price of dignity, Who Ah Di Don? manages to authentically capture a sense of truth to the axiom that blood is thicker than water – even under the most dire of circumstances. Unfortunately, such moments of clarity and ascendancy are not sustained. And this works against the production.

Intermittent laughs aside, it largely boils down to a case of high-energy goings-on and Oliver being Oliver with an ardent supporting cast along for the ride. Overall, this ‘Don’ could use a bit more power. Tyrone’s Verdict: C