BEING MAGGIE: Oscar-worthy Streep is majestic in 'Iron Lady' 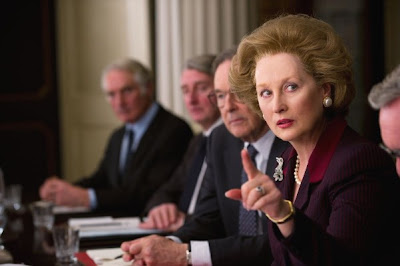 ROLE WITH IT: Streep acts the part in The Iron Lady.
Meryl Streep’s turn as iconic British Prime Minister Margaret Thatcher in The Iron Lady is such a tour-de-force that you rather quickly forget you are watching an actress inhabit a daunting role. Portraying the historical figure – from age 49 to 85 – Streep’s performance is destined to be ranked among the finest of her now-legendary screen career.Much like the woman herself, The Iron Lady, as directed by Phyllida Lloyd (Mamma Mia, also starring Streep), is flawed – it often glosses over key events in that era of British history – but it is full of wisdom and wit. So although the film aims to accomplish more than simply offer viewers a fleeting history lesson centred on the iconic figure who happened to rock British politics in the 80s as the nation’s first female head of government it woefully misses the mark. And the way I see it, the film’s nonlinear narrative further compounds this issue.Alternately respected and reviled, Thatcher was certainly a force to be reckoned with. And as Streep’s work and the film at large attests, she abhorred weakness, strongly championed the working class and had the tendency to make the men around her feel inferior, but especially her longsuffering husband Dennis (Jim Broadbent) and those who served in her administration when she ascended to the prime ministership in the time of Ronald Reagan, the Cold War and other international affairs of critical import.The biopic jumps back and forth in time, as it illuminates varied aspects of Thatcher’s life (marriage, motherhood…). Most compelling though: her youthful ambition to enter representational politics as a woman bent on breaking through the barriers of gender and class to be heard in a male-dominated world – and her heart-breaking descent into dementia in old age. The young Margaret Thatcher is played by the talented, steadfast Alexandra Roach.Substance-wise, The Iron Lady, penned by Abi Morgan (Shame), lacks sufficient clout and muscle. But the leading lady’s charactertistically splendid effort makes the film watchable at the very least. Throughout the film, Streep’s Oscar-worthy and majestic performance remains completely immersed and reliably convincing. Tyrone’s Verdict: B