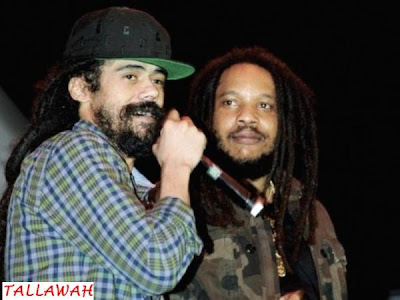 MARLEY MAGIC: Stephen (right) and Damian in performance.
Accolades are nothing new for Stephen Marley, whose latest effort, Revelations Part I, is among the nominees for Best Reggae Album at the Feb. 12 Grammy Awards. Unsurprisingly, Stephen was rather blasé about the whole thing when TALLAWAH bumped into him at last Saturday’s Shaggy & Friends. “Well, I make the music, and if I hear that it’s nominated – cool. It’s good. If it wasn’t nominated I wouldn’t feel any way,” he explains. “I just make the music. So it do what it do. The music speaks for itself.”Marley, 39, confesses though that he’s gone through considerable maturity – both personal and artistic – since his last solo outing Mind Control earned him the much-coveted award. “I’ve grown since Mind Control. That was 2007, now is 2012. So I’m hoping that people see the growth within me since that time to this time.”The in-demand reggae singer and producer also revealed that he’s hard at work on a sequel to Revelations, due out later in 2012. “Part II is coming on very good,” he says. “In terms of a release date, I’m hoping for April of this year.”