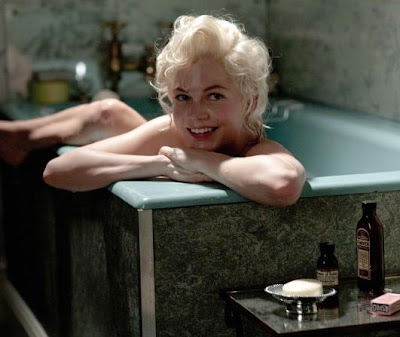 EASY AND FREE: Williams as the sexy icon in My Week With Marilyn.
Loosely based on a pair of lean memoirs by the late documentary filmmaker Colin Clark, My Week With Marilyn chronicles the tumultuous story behind the filming in England of 1957’s The Prince and the Showgirl, the comedy in which Monroe starred opposite Sir Laurence Olivier (portrayed here with acerbic wit by the great Kenneth Branagh), who was also the film’s director.

The promising collaboration between Britain’s most revered actor, who seriously wants to get the film done, and America’s blonde bombshell, who wants to be taken seriously as an actress, quickly disintegrates into a clash between a no-nonsense director and a woman seemingly unable to show up on time, learn her lines, or come out of her dressing room without an entourage that quiets her emotional storms with pills, booze and flattery.

As Colin, a 23-year-old gofer on the set, played with bright-eyed enthusiasm by Eddie Redmayne, tells Monroe, “This film won’t help either of you.” It is Colin’s brief time with Monroe as her confidant, protector, and almost lover that gives the film its tenderly beating heart.Dougray Scott (Desperate Housewives’ Chuck Vance) stars as Monroe’s playwright husband Arthur Miller; Dominic Cooper as her anxious business partner Milton Greene; and Zoe Wanamaker as her devoted acting coach Paula ‘Lee’ Strasberg. There are wonderful cameos by Emma Watson, Sir Derek Jacobi, Simon Russell Beale and Dame Judi Dench as the thoughtful Dame Sybil Thorndike, who jumps to Monroe’s defence on-set on a number of occasions.If My Week With Marilyn never quite achieves the mastery of a period piece like last year’s The King’s Speech, it beautifully evokes a glamorous cinematic era. And the main attraction, of course, is Williams who brings the shapely Monroe to life with heartbreaking delicacy and precision. It’s a mesmerizing performance validated by Williams’ recent win at the Golden Globes and her Best Actress nomination for the Feb. 26 Academy Awards. Tyrone's Verdict: B+