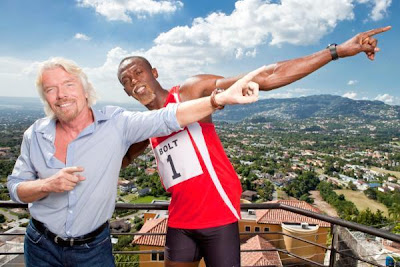 FAST FRIENDSHIP: Branson keeps up with Bolt on the set of their shoot.
It’s quite a pairing: the planet’s fastest man stepping into the shoes of one of the richest. In a freshly premiered ad campaign from Virgin Media, Usain Bolt tries to convince us that he is British business titan Sir Richard Branson, even donning Branson’s signature goatee to make his ruse effective. It’s a noble attempt, but there’s just that little problem of race.The tongue-in-cheek jokes play out in the vibrant clip, filmed in Kingston last year by Hollywood director Seth Gordon, who won raves for his 2011 hit comedy Horrible Bosses, which stars Jason Bateman and Jennifer Aniston.The advertisement campaign, which launched last on Saturday nationwide on British television, comes in the wake of Virgin Media signing the Jamaican Olympic star to a multimillion-pound deal to help promote the company’s superfast broadband service. Bolt and Branson will appear together in a series of the promotional ads.“The trick was to avoid the obvious sportsman endorsement clichés,” explains Jeff Dodds, executive director of brand and marketing communications at Virgin Media. “It is a brilliantly simple idea.” The ad campaign, which has been created by agency DDB London, introduces the tagline ‘Keep Up’ that Virgin Media plans to use in future marketing activity.