IT’S A MAD, MAD WORLD: Back A Yaad takes an unflinching look at pride and poverty 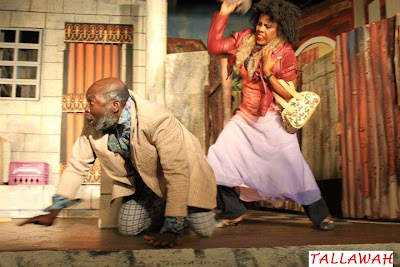 DOWN AND OUT: Silvera (right) and McFarlane get physical.

Back A Yaad (DMH Productions)Director: Owen EllisCast: Dahlia Harris, Chris McFarlane, Akeem Mignott and Deon SilveraVenue: Pantry Playhouse, New Kingston.
There is absolutely nothing pretty about the hardscrabble Mucky Pen, the ghetto community that serves as the setting in Dahlia Harris’ well-written new comedy-drama Back A Yaad, an occasionally unsettling but ultimately important work. As Harris proved with previous efforts Judgement and God’s Way, she finds little allure in the superficial glamour of people’s lives; rather, she’s much more interested in the raw and the real.To that end, she has crafted an engaging story that examines a channel-surfing of themes and issues – from disillusionment, anger and fear to the universal ideas of community and family, and what we’re willing to sacrifice to escape our difficult circumstances. Then there’s that inescapable thing so loosely referred to as ‘madness’. In the universe of Back A Yaad, the word dually trades in the concepts of insanity and rage.Although the tale doesn’t always steer clear of the formulaic route, there’s some undeniable wit here and the layered characters, which consistently come across as authentic samples of struggling Jamaicans, are brought to life by a terrific cast. But above all, Back A Yaad successfully captures the rigours and pressures of innercity living.The set design’s miles of zinc fence and wooden dwellings, to cite only a few of the elements, speak to the deep and abiding hardships of the people who inhabit Mucky Pen, once a thriving neighbourhood known as Majesty Gardens. How times have changed.Today the area is home to people like Madeline (a wonderful, unrecognizable Deon Silvera), whose overwhelming hard-knock experiences have pushed her into a mental illness that demands regular medication. Her teenaged son Justin (Akeem Mignott, full of vigour) has had to drop out of school, now charged with the responsibility of tending to his mother. It’s a burden for the youth, and it regularly brings out his penned-up resentment. As their backstory indicates, Maddy and Justin have been abandoned by family and friends.The resident “skettel”, the vociferous Rihyonce (played by Harris with tireless hilarity), also faces a similar plight, but she finds hope in her passion for singing – even entering a local televised talent contest. Think Rising Stars.For help the residents often look to Empress (Harris, pulling double stage duty), their calculating Rastafarian neighbour whose resources afford her some power over the less fortunate. So when prideful returning resident Jeremiah Pound (Chris McFarlane, grows into the role) arrives from Britain with his foreign style and strange ideologies, Empress deems him a threat to her position of influence and quietly hatches a scheme with the others to drive him away.And that’s when the action really heats up. Director Owen Ellis, whose roots are in comedy, manages to strike a decent balance between the light and the heavy stuff, as the emotions overflow, running the gamut from joy to palpable pain, frustration to relief. It's quite an entertaining roller-coaster of a play.At a time when our beloved island nation is pausing to reflect on the past 50 years, Back A Yaad comes at an opportune time, holding up a crystal-clear mirror to the society, even if it touches on matters many other writers would be happy to ignore. Not Harris. Although she’s only three plays in, the multitasker is demonstrating a penchant for powerful and emotionally acute stories grounded in reality. Tyrone’s Verdict: B+

Posted by TALLAWAH Magazine (tallawahmagazine@gmail.com) at 11:51 am