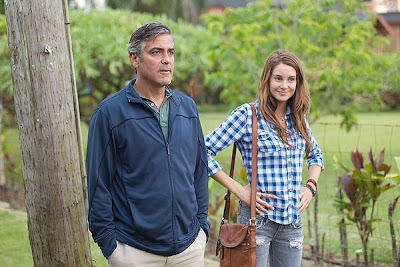 GLORY DAZE: Family matters for Clooney and Woodley in The Descendants.
Emotions run high in The Descendants, a poignant and amazingly acted family drama that tackles its core subjects of grief, love and forgiveness to great effect. Set in Hawaii, the Alexander-Payne directed film also showcases sumptuous scenery, throwing some visual splendour into its heady mixture of sorrow and gut-wrenching family secrets.The film focuses on Matt King (George Clooney), a deeply likeable and hardworking lawyer and family man charged with the weighty responsibility of solely raising his two headstrong daughters – Alex, 17, and Scottie, 10, – following a devastating boating accident that puts his wife in a permanent coma. Taking care of the girls (who have a taste for the occasional expletive), running his law practice and worrying about his dying wife while overseeing the sale of family land descended from royalty, Matt is in over his head. Before long, he earns your empathy.Even so, it becomes evident that Matt is somewhat out-of-touch. Overly consumed as he was with his work prior to his wife’s accident, Matt had absolutely no clue that she was carrying on an affair with a local realtor (played with goofy appeal by Matthew Lillard) for quite some time. The older daughter (a terrific Shailene Woodley) and close friends of the couple knew. So as it turns out, the series of unfortunate events becomes a much-needed wake-up call for Matt, who subsequently becomes consumed by the need to confront his wife’s lover. “I want to see his face,” he tells Alex.But all in all, Matt King is a decent, stand-up guy with admirable qualities – and today there is hardly a better living actor than Clooney to do him justice. It’s ideal casting. Clooney’s performance is superbly executed, steeped in control and nuance. Onscreen, we’re using to seeing George Clooney as the dashing lady-killer, but here he’s convincing as the concerned father figure grappling with unanticipated circumstances.For his part, Payne (Sideways) casts a compassionate eye and brings just the right amount of sensitivity to The Descendants, elevating the film to a wonderful tale of family and fractured relationships. Although it grows a tad too sentimental towards the end, you find that it’s Payne’s way of evoking the beauty and peace that comes with letting go. Tyrone’s Verdict: A-

Email ThisBlogThis!Share to TwitterShare to FacebookShare to Pinterest
Labels: At the Cinema, Movie Reviews, Oscar Buzz